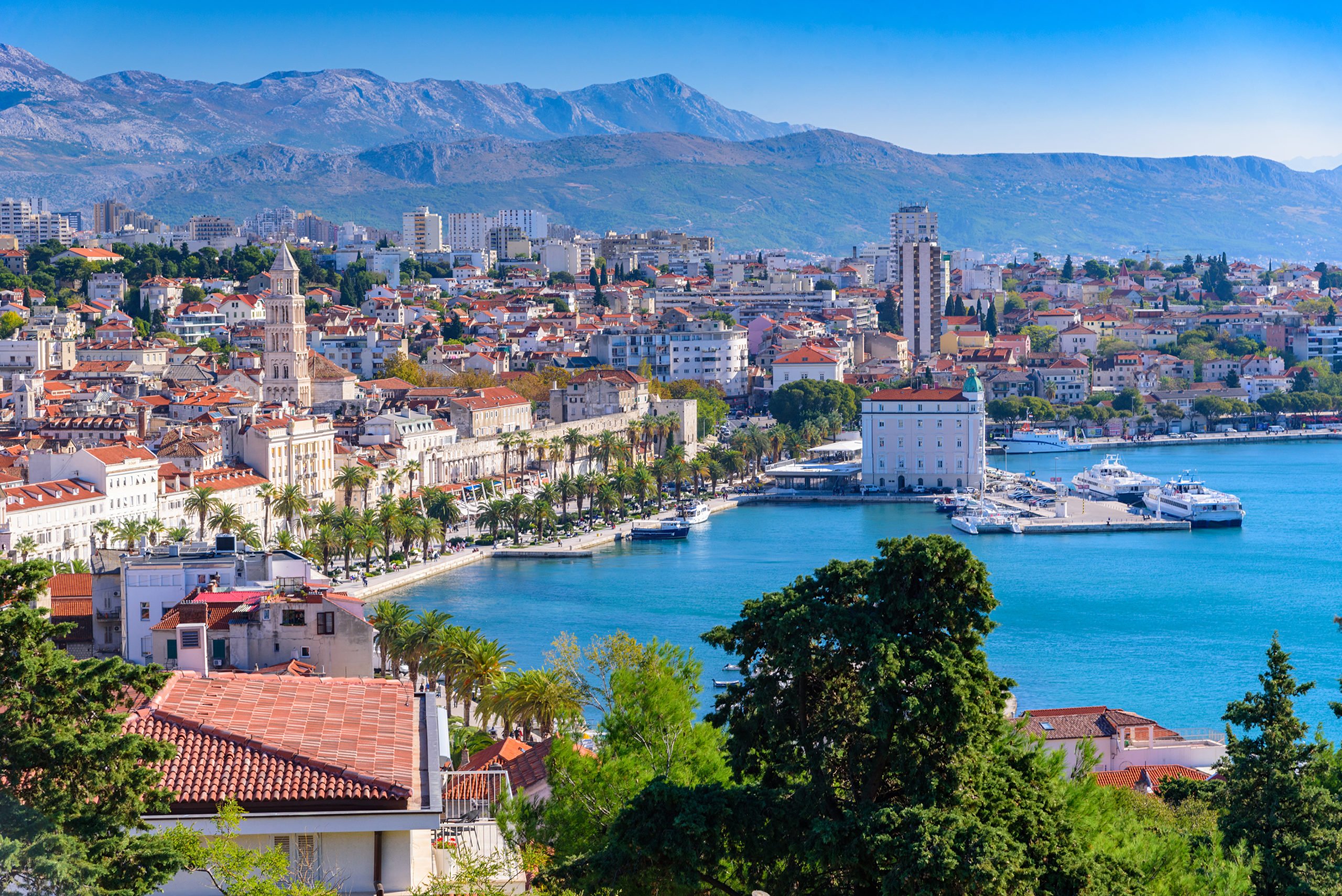 Where to Stay in Split

Often overlooked in favor of Dubrovnik, Split is nonetheless an attractive choice for anyone seeking out an authentic Mediterranean destination. The largest city on the Adriatic Sea, it has long held the mantle as Croatia’s cultural epicenter. But this working city also has an extraordinary setting, jutting out into the Adriatic while surrounded by sublime coastal mountains. If you’re wondering Where to Stay in Split, look no further than our collation of the best hotels in Croatia’s second city.

Split’s Old Town remains the focus of activity in the city. Spilling out around the northernmost extent of the stunning natural harbor, it was made a UNESCO World Heritage Site in 1979. Its most celebrated attraction has to be Diocletian’s Palace, built for the Roman emperor of the same name in the fourth century AD. Today it houses a range of stores and small cafes amid spectacular architecture. As such, the Old Town is the starting point for our Split Walking Tour, and a whole range of other tours in Split.

One of the most exclusive stays anywhere in Split, Heritage Hotel 19 has only a handful of rooms. While never losing sight of its heritage, these rooms each display a modern air. Outside, an attractive series of furnished terraces echo with bird song and the trickle of a fountain. Complimentary breakfasts are an added bonus.

Visible from the port, Hotel Luxe is a boutique hotel with 30 rooms formed out of the stone shell of a 100-year-old factory building. Despite this, inside guests will find crisp interiors with just enough design detail to make it memorable. Not afraid of color, much of the décor was picked by the current owners. Many of its rooms offer fine Adriatic views.

The bare brick and stone walls of Hotel Vestibul Palace & Villa seem to peel back the centuries, and what could be better in a place like Split? Perhaps the blend of early to mid-twentieth century design classics, such as leather and tubular steel armchairs. Or maybe the daily complimentary buffet breakfasts. Or possibly those luxurious touches included bedding made with Egyptian cotton.

You can count the number of rooms at Villa Split Heritage Hotel on just two hands, ensuring a tranquil and personal stay. Not afraid to display its heart on its sleeve, this hotel boasts authentic wooden ceilings and ancient walls together with more modern furnishings. A small terrace space provides outdoor access, while more sophisticated features include chandeliers and modern photography.

As classy as it is historic, Murum Heritage Hotel contains structures that have stood since the Roman’s constructed Diocletian’s Palace. As a result, natural materials predominate both inside and out. Tactile and warm in the atmosphere, the seven rooms have a sense of place while offering all the modern amenities you would expect from a four-star stay.

Each of the eight rooms at Hotel Agava, Split boasts a patio or private balcony from where guests are able to enjoy the city’s Mediterranean climate. Further views can be absorbed from the terrace and garden with an outdoor pool. Alternatively, guests can sink into a comfortable chair in the shared library. Rooms are unique to one another, but all are brightened by touches including original artworks. Of all its features, its location a couple of steps from the shore has to be top of the list though.

Immediately south and east of the Old Town, Bacvice is a neighborhood close to the railway station and port. That said, it’s only 15 minutes on foot from Diocletian’s Palace. It’s therefore an excellent area to stay in to take advantage of all the city has to offer, including our Game of Thrones Day Tour and Plitvice Lakes Tour.

The pure white cuboid form of Briig Boutique Hotel certainly packs a punch on arrival. Pierced by an irregular pattern of windows, it’s like no other stay in Split. Its grounds include wrap-around garden terraces, while rooms are stylishly contemporary and come with smart televisions and a complimentary buffet breakfast. Many of the rooms face out onto the beach, while all guests are able to make use of the outdoor pool and fitness center.

Continue south and east along the coast from the Old Town and you’re still within easy reach of the major sights. But you also have the advantage of enjoying unspoiled Adriatic Sea views from a number of ideal hotels. Here are two which we really rate.

This aparthotel contains just six rooms, each of which has been individually finished. Their amenities include refrigerators and stovetops, while also offering outside space in the form of a balcony or terrace. Dramatically contemporary, this glass and white concrete structure look out onto a good-sized open-air pool with terrace and sun loungers. All in all, Hotel Posh Split shouldn’t be ignored when deciding where to stay in Split.

The uber-cool Amphora Hotel has a coastal location just 15 minutes east of Split Old Town. Clean lines are formed through the use of varying shades of wood, in addition to a backdrop of neutral tones. Guests are able to make use of an indoor and outdoor pool, while they can also enjoy a complimentary buffet breakfast within earshot of the Adriatic’s gleaming waters.

A hotel can make or break a trip, and therefore knowing where to stay in Split is all-important. If you’re keen to learn more about what the city has to offer, why not check out our dedicated Split city guide? Of course, there’s more to Croatia than Split alone. Our Croatia Travel Guide details our top attractions, which may well also lead you to the most beautifully designed hotels in Croatia too. 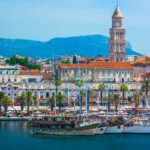 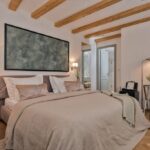