Udon refers specifically to a type of noodle that is very common in Japan and used in a variety of Japanese dishes. The udon noodles are made from wheat flour and are thick. Perhaps the most common way to eat these thick udon noodles is in soup broth known as Kake udon.

Udon noodle soup is hearty, warm and filling with a savory broth made from soy sauce, mirin, and dashi, but the specific flavors of the brother differ from region to region, and this is reflected in the color of the broth. The soup is filled with thick udon noodles and topped with many other delicious options including tempura, and tofu. Additionally, udon soup is served with thinly sliced green onions and more often than not has a small fish cake or two added to the top. These fish cakes are known as kamaboko and add both flavor and texture to the brothy soup.

It is believed that udon noodles date back to the Edo period, most specifically the shape of the noodles. Like miso soup, the concept of broth made from bonito emerged during the same time. 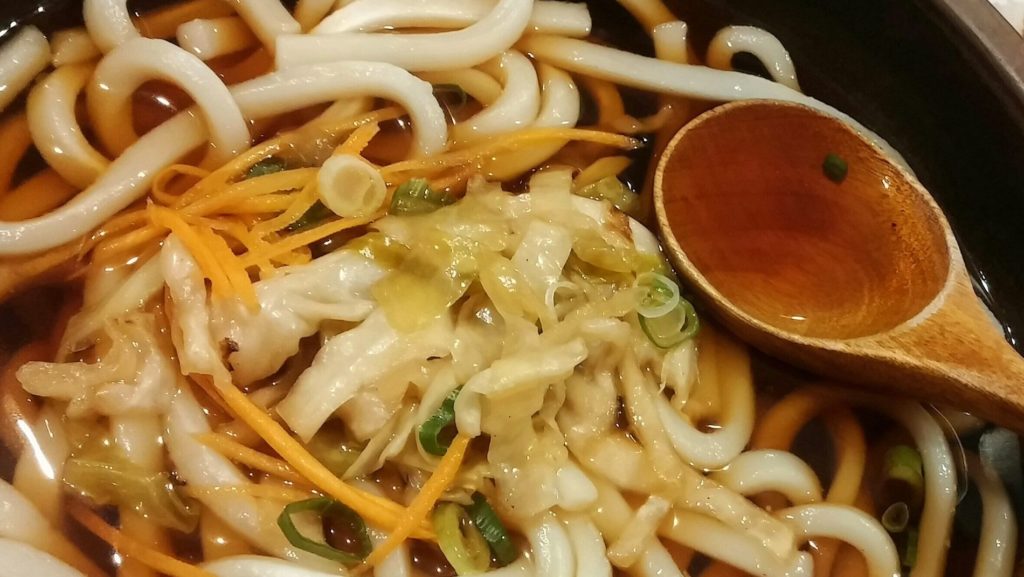 How to eat Udon Noodle Soup

The most common type of soup – Kake Udon – is most often served in a donburi bowl, and the noodles are boiled fresh and the hot broth is then poured over the noodles into the bowl. To eat the soup, it is recommended to scoop the noodles with chopsticks, and pick up the bowl and bring it directly to your mouth in order to sip the broth from the bowl. It is not the type of dish which can be enjoyed slowly, as the noodles can get soggy if they sit in the broth for too long and are more enjoyable when they retain their firmness and freshness.

You can also season the soup to your desired taste by adding some extra flavors which are often on the table or you can ask for them. Things such as ginger, seasons, extra scallions or hot sauce and chili powder to add a spicy kick.