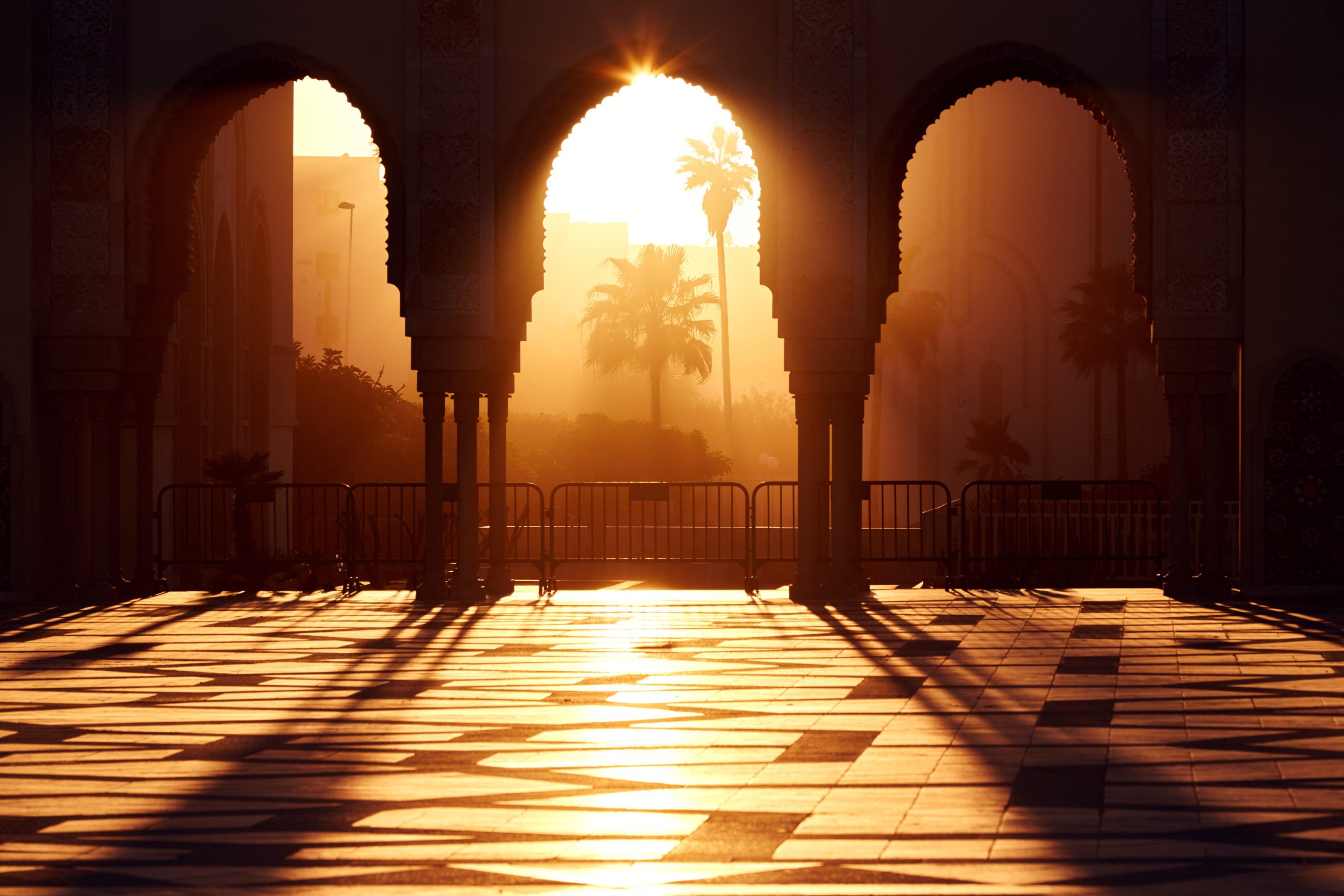 Situated on the western coast of Morocco, overlooking the Atlantic Ocean, Casablanca is Morocco’s largest city, so what can you do with two days in Casablanca? There is a small medina, the old walled city, and huge ville nouvelle, new town, in addition to the world’s largest artificial port. The city’s French influence can be seen melding with Moorish architecture throughout the city, and there are also plenty of places to visit, a cosmopolitan arts scene, and great dining opportunities that you won’t find anywhere else in Morocco. The first community to inhabit this area were Berber fishermen in the 10th century BC, and they were followed by Phoenicians, Romans, and Merenids who called the strategic port town Anfa. In the 15th century, the Portuguese destroyed the town and re built it calling it ‘Casa-blanca’, giving us the iconic city that the world knows and loves today.

The best way to explore the city is using the new tram service that opened in 2012. The service operates weekdays 06.00- 22.30 (fewer trams on weekends) and with 48 stops, it is the ideal way to hop on and off at the various places of interest we mention below for your two days in Casablanca.

This impressively sized mosque is the largest in Morocco – and the third largest in the world. The mosque’s minaret is also the tallest in the world, so the mosque is a must see – especially since it is open to non-Muslims (respectfully dressed). The mosque was completed in 1993, having taken 10,000 men more than seven years to build. The stands on a platform that is perched half over the water and inside there is a glass floor so worshipers can see the ocean beneath their feet.

King Hassan II can accommodate 25,000 worshippers inside and a further 80,000 in the courtyard outside. The building is truly beautiful and its roof is open to the endless sky above. There is intricate tile work to admire and stylish water features. In the basement there is a hammam, which is sadly not in use. The best way to see the mosque is by joining a tour, which are available Saturday -Thursday at 10.00, 11.00, 12.00, 15.00, and 16.00. Fridays are the same, minus the 12.00 tour. Sunday the Mosque is closed. The tour takes 40 minutes and costs 120 Dirham.

This is the old walled city and lies in the northern part of the city. It is worth visiting, but is much more modest than the medinas in Marrakesh and Fez. There is a labyrinth of narrow alleyways and it is the perfect place to experience traditional local life and see La Sqala -the old Portuguese fort. There are numerous tiny shops where you can buy spices, clothing and handicrafts – with some good natured bargaining! If you fancy a traditional brunch of tagine and freshly squeezed fruit juice, La Sqala Café Maure on the edge of the medina is a popular choice, offering live entertainment 4 nights a week. The Old Medina is situated North of of the Place des Nations Unies.

This elegant French-inspired square is the administrative hub of the city and the square is surrounded by public buildings, including the courts of law. There is an impressive statue of Marshal Lyaukey who was the first French resident General in Morocco (1912-1925). A beautiful large fountain was added to the square in 1976 and every day there is a dancing water show set to music.

Situated just south of the Mohammed V Square is the largest park area in the city. The gardens have a palm tree lined avenue and colorful African flowers bordering the walking paths. On the edge of the gardens sits Cathédrale de Sacré Coeur, no longer a working cathedral, which is a popular venue for local art and other exhibitions. Parc de la Ligue Arabe is open 08.00-18.30 daily

Just west of the Hassan II Mosque lies La Corniche, which is a wide boulevard that borders the ocean. Many years ago it was a thriving beach resort with hotels lining the coastal side of the Corniche and nightclubs the other, and some of the hotels still remain. It is fun to stroll along La Corniche and soak up the atmosphere. There are abundant cafes and restaurants with panoramic views of the ocean. Le Cabesten has been in business since 1927 and is seriously good, whilst Bleu, situated on the fifth floor of The Four Seasons Hotel, is a popular upscale venue. There is access to the beach where you can take a dip or watch the surfers and joggers, or just stretch out on the sand. This is definitely the place to be at the end of the day, as the sunsets are spectacular.

Situated a the far end of La Corniche is the Morocco Mall which is the largest shopping mall in the whole of Africa – 200,000 m² of floor space with upscale boutiques and an eclectic mix of local goods. If you love shops, you could spend many hours enjoying the shops which include all the top names as well as a number of local exclusive brands. There are food options, an indoor aquarium, and a small indoor souk. The mall is open from 10:00 to 21:00.

The Shrine of Sidi Abderrahmane

This is a fun place to explore at low tide as this is the only time it is accessible, off the boulevard of Sidi Abderrahmane. The shrine is situated beyond the Corniche and is perched on a rock offshore. The shrine is of great significance to Muslims from all over the world and it is credited with healing mental illness. The shrine itself cannot be visited by non-Muslims, but there is a small community, a little like the Medina, close by.

This impressive Hispanic-Moorish building is well worth exploring as it has more than 60 rooms that are beautifully decorated with intricately carved wooden ceilings and colorful tiled floors. While entrance is free, you need to be escorted by a French or Arabic speaking guide through the property.

Stop for a Bite

As well as the restaurants already mentioned, there are many good restaurants in Casablanca and you are not limited to just Moroccan food as there are superb French ones too!

If you are in the vicinity of the medina, a great place to visit is the cocktail bar Sky 28, which offers guests panoramic views over the city. The cocktails are really good too – albeit a little pricey. The ideal time to visit is at sunset as it is spectacular to watch the sun disappear and see all the lights of the city starting to twinkle.

If you would like to combine excellent French cuisine with a view of the ocean, Relais de Paris is a beautiful restaurant situated in Villa Blanca Hotel on La Corniche. Its decor resembles a chic bistro and the food is elegantly served and includes a spectacular fish buffet.

Rick’s Cafe is definitely worth a mention! Made famous in the 1942 movie, Casablanca, Rick’s Cafe is situated next to the old city walls in the Medina in an old mansion with fireplaces and lovely dark wood. The menu features plenty of lovely fresh fish dishes and vegetables – Moroccan style. It is still a piano bar, with regular live entertainment gracing its hallowed halls.

A restaurant that is incredibly popular with both visitors and locals is Port de Peche which is situated by the old fishing harbor. The restaurant serves wonderful fresh fish that has only been caught only hours earlier and its paella is legendary!

Casablanca does not have traditional riads or boutique hotels, but does have some of the big names in luxury hotels such as the Four Seasons, Sofitel Casablanca, and the Hyatt Regency. There are other gems too like the Hotel and Spa Le Doge which is an art deco style hotel with individually styled rooms, a gorgeous hamman and spa as well as an impressive restaurant. Another popular choice is the Le Casablanca Hotel which is situated just five minute’s walk from the La Corniche and the Royal Golf Course. The hotel is really comfortable with a relaxing ambiance and two pools – an outdoor pool and indoor sensory pool. If you prefer the idea of relaxing in your own suite, Pestana Hotel could be the perfect choice. This suite only hotel is situated on La Corniche and overlooks Lalla Meryen Beach.