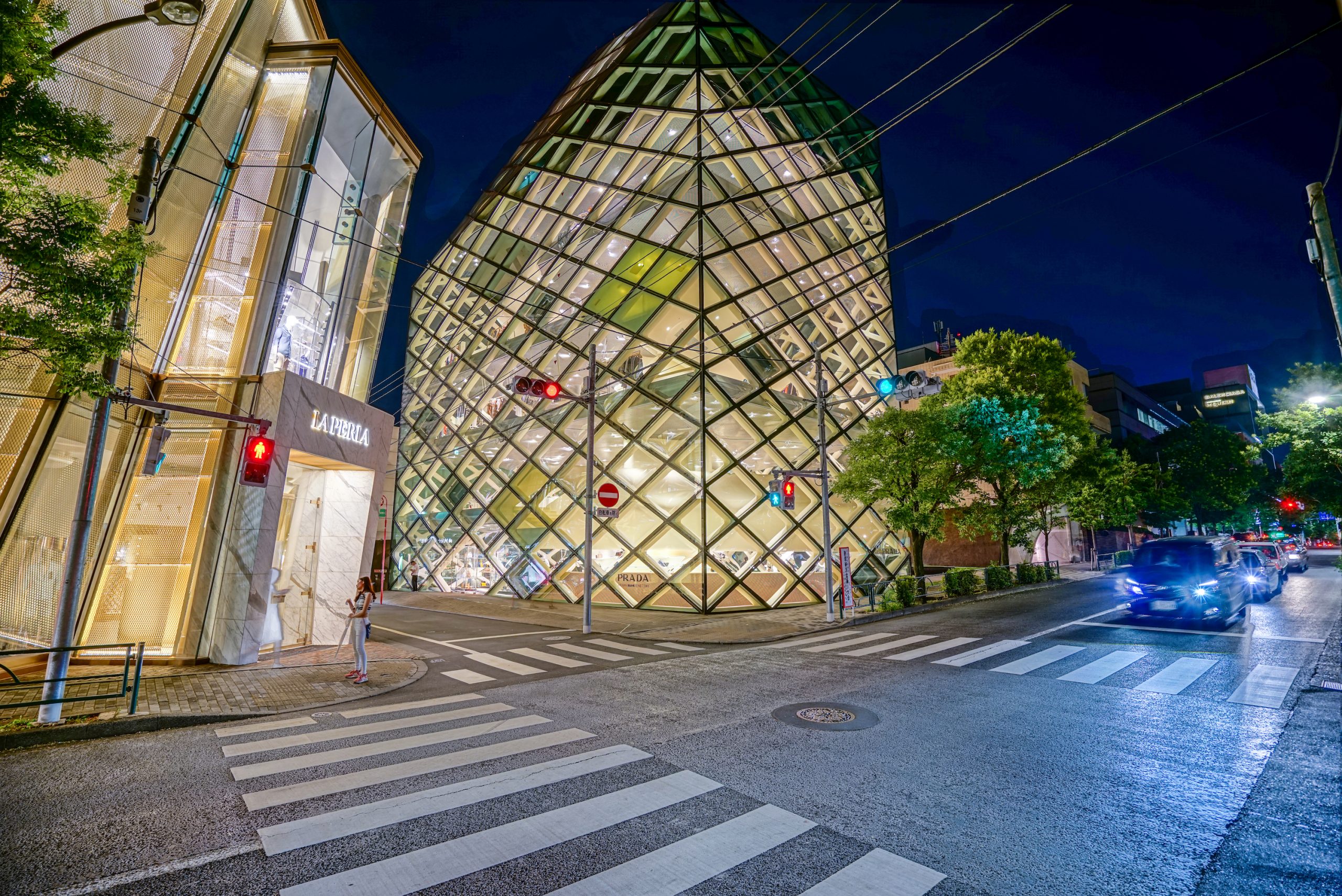 Tokyo is a design wonderland. Every building, door, nook, and cranny of the city is teeming with architecture and design inspiration beckoning the creatives of the world to relish in this hustle and bustle megalopolis. A trip to Tokyo is a sensory experience at that; one that awakens and impacts every cell and vertebrae in your body. The bright lights, the fashion, and the abundance of new wave architecture make Tokyo the perfect destination to get your creative juices flowing and feel inspired. From steel high-rises to funky-shaped buildings, Tokyo is a magnet for all types of innovative artists seeking to revolutionize its dynamic and burgeoning culture. There are endless possibilities for discovering the baroque beauty in the mayhem of Japan’s most densely populated prefecture.

Eat your heart out, but not before capturing heaps of photos. Tokyo’s food scene is an inspiration to all, foodies and artists alike. It is no secret that Tokyo is home to over 200 Michelin star restaurants. The colors, the shapes, and the flavors make Tokyo’s gastronomy one of the most unique in the world. Gigantic rainbow candyfloss in Tokyo’s Harajuku neighborhood is the most Instagrammable cotton candy you’ve ever encountered, and also probably the largest. Japan’s obsession with all things “kawaii”, the Japanese word for cute, create a food culture infused with Totori-turned cream puffs, cat-shaped cakes, melon rolls in the shape of whales, and decorative bento boxes. These are just some of the intriguing foods you will come across on the streets of Tokyo.

Tokyo also boasts a number of fine dining establishments where not only does the food impress, but so too does the restaurant’s imposing design. A trip out to Yakumo Saryo in Meguro is worth it if just for the aesthetics alone. The restaurant is a converted home designed by the Japanese architect, Shinichiro Ogata. While dinner is by invitation only, reservations are open to the public for breakfast and lunch.

In Tokyo, a simple act like buying macarons is transformed into an artistic experience. At the Ladurée shop in Shibuya, French designer India Mahdavi has created a colorful interior that mirrors the shop’s macaron box palette.

Tokyo is home to a large number of remarkable museums which each offer a drastically different portrayal of Tokyo.

The Mori Art Museum is a contemporary art museum situated at the top of Mori Tower, an iconic building which can be seen throughout the city. The museum hosts some of the most impressive art shows in the city which display the works of international artists.

Lovers of Ghibli and motion graphics will be enthused by the Ghibli Museum at Inokashira Park in Mitaka. The museum is part of the renowned animation studio, Ghibli, which has brought us acclaimed Japanese anime films like Spirited Away, Princess Mononoke, and My Neighbor Totoro.

SCAI The Bathhouse is a modern and contemporary art gallery housed in a former public bathhouse that was constructed in the late 1700s. Much of the bathhouse has been preserved, displaying traditional Japanese architecture like Japanese roofing tiles, a 7-meter high ceiling, and skylights. Prominent artists have been on display here like Anish Kapoor and Tatsuo Miyajima.

To visit 21 21 Design Sight is to completely immerse yourself into the world of design. The brains behind the peculiar design of the exhibition space and research center are architect Tadao Ando and designer Issey Miyake. The building was designed by Ando, who found inspiration in Miyake’s A-POC. It is composed of two concrete structures with steel roofs and glass panels. The building is composed of two galleries as well as a cafe. In addition to exhibitions, 21 21 Design Sight hosts talks and workshops to broaden the audience’s experience of international design.

For Japanese fashion inspiration, there is no better place to go than Harajuku. Explore the pedestrian-only Takeshita Street for 400 meters of fashion, food, and excitement. Many of Japan’s quirkiest fashion trends arose among this colorful and cute youth-filled street. Wander down the small alleys as you take in the sights of young, giggling Japanese girls dressed in pastels, dozens of hair clips, and knee-high patterned socks.

If you have a knack for design and you’re in the market for new cutlery, there’s no better place to splurge than at the Kiya Cutlery Shop. The shop has been around for hundreds of years, offering mostly kitchen knives but also scissors, nail clippers, and pots. They carry knives for virtually every category of food, with seven different knives for eel alone. The cutlery is put on display like works of art.

Tokyo’s architecture is as diversified as it gets, from steel and glass high rises to 1970s living capsules, to traditional temples.

The famous transparent House NA is located in the funky suburb of Koenji among vintage shops and bars. The transparent three-story house was designed by Japanese architect Sou Fujimoto. The house is sleek and bold, with a minimum number of glass walls.

The Nakagin Capsule Tower has around 140 apartments, only half of which are used as storage space or offices. The building was created in 1972 by Kisho Kurokawa and serves as a prime example of Japanese Metabolism. There are plans for the building to be demolished sometime in the future, so start planning your visit.

The Roman Catholic Church is an architectural icon in Bunkyo and Tokyo’s most impressive cathedral. It was designed by the mastermind Kenzo Tange in the early 1960s. It is recognized for its cross-shaped stainless steel structure and dramatic sloping walls which are at times lit up in red or blue.

The austere, black, spaceship-like temple is one of the most striking buildings in Tokyo. The building was constructed in 1925 for the Reiyukai new religious movement, a spin-off of Buddhism. Despite its intimidating structure, inside, friendly monks greet visitors, offering drinking water and Japanese language classes.

The Tokyo International Forum is one of the most iconic landmarks in Tokyo. It was designed by Rafael Viñoy and completed in 1996. The space hosts concerts, conferences, exhibitions, restaurants, and shops. The various rooms are connected by a 210-meter long and 60-meter high colorful lobby referred to as the Glass Building. The lobby is made entirely of glass and steel and is quite simply a photographer’s dream.

The reversible destiny lofts were built by architects Shusaku Arakawa and Madeline Gins in 2005. The colorful building features nine apartments with uneven floors and rounded walls, awkward light switches, and power sockets in the ceilings, among others. The designers sought to help residents achieve longevity by awakening them with lopsided and physically challenging spaces.

Many of Japan’s high-end fashion stores have constructed flagship stores with unrivaled architecture. Prada’s flagship store was designed by Herzog & de Neuron, who wanted to create a space that would redefine the experience of shopping. The attention-grabbing exterior is covered in diamond-shaped panels while its interior has plush white carpets and rounded plastic walls. Meanwhile, the neighbouring boutiques in the Omotesando feature inspiring designs by some of the world’s most creative architects and fashion designers.

The Tokyo Tower is one of the most unique buildings in the city. While it’s no longer the tallest building in Japan thanks to the Tokyo Skytree, its red and white framework nonetheless stands as an icon of the country’s modernity.

The Mikimoto Ginza Building is a gem of the Ginza district, designed by Toyo Ito. Its rectangular steel-reinforced concrete structure stands at 56 meters tall and features irregular-shaped Swiss cheese-like windows. Its exterior glows in a pink tone, and at night, different colored lights brighten up the windows.