While traveling in Japan eating fresh tempura is a must. The concept of tempura emerged in the 16th century in Japan when Portuguese missionaries visited Nagasaki. With them, they brought a different cooking method of coating foods in a simple batter made from eggs and flour and frying in hot oil. Prior to this, Japanese food incorporated fried foods, but none with a batter coating.

Today, tempura batter has evolved but still sticks to its humble beginning and oftentimes includes eggs and flour in the batter mixture. From vegetables to seafood, the options are plentiful and delicious. In order to maintain freshness, ingredients are prepared in a special manner. For example, the vegetables or fish may be cut in a specific shape or size and when the tempura batter is prepared, it is made ice cold. The items are then submerged in the cold batter and placed into very hot oil ensuring that each section is crispy. 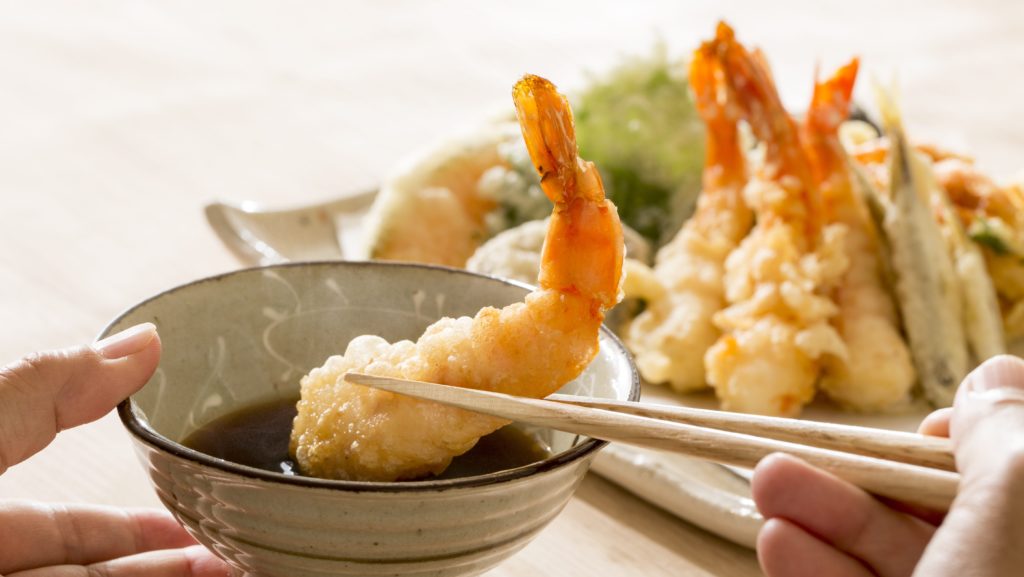 In the fast-paced beat of Japan, tempura is often considered fast-food, or a convenience food in that it is prepared quickly and relatively cheaply. Tempura is also often sold from carts of street vendors. Another addition to modern day tempura is that it is almost always served with a dipping sauce. Alternatively, tempura may be salted and served without sauce or as an accompaniment to other dishes. Oftentimes, tempura can also be found in udon soup or on top of soba noodles.

Some of the most common tempura options include prawns, (ebi) shrimp, and squid. Other popular seafood tempura includes scallops, catfish, haddock and sea bass although almost any seafood if cut properly can be fried. For vegetable tempura known as yasai tempura, again many vegetables are commonly used, popular options include sweet potato, bamboo shoots, carrot, eggplant, onion, broccoli, and mushrooms.

While traveling, there are many options for Tempura ranging from cheap street eats to Michelin star, the range is quite large. Tempura is also often included as part of a bento box – a single portion meal (often lunch) that is served with rice, vegetables and either seafood or meat and often soup. One thing is certain, tempura should always be served, fresh, hot and crispy.