Are there any tattoo restrictions in Japan?

The controversy that surrounds tattoos in Japan is one that is very confusing, both for foreigners and Japanese people alike. So, are there any tattoo restrictions in Japan? One widely-perceived belief is that tattoos are associated with the mafia-like organisation known as the Yakuza and as a result, normal law-abiding citizens are scared of all tattoo-bearers and thus instinctively disapprove.

As a result, those with even the smallest tattoos are believed to be unwelcome on public beaches, onsens and gyms. The practical reality is, in fact, much more nuanced and the history of tattoos in Japan are equally so.

History of tattoos in Japan

There is even much debate amongst historical scholars of Japan surrounding the first tattoos in Japan with some believing they can be traced back as early as the 3rd Century, as evinced by some distinct markings on clay figurines. The influence of Chinese culture on early Japanese society slowly had an effect regarding tattoos and by the 7th Century, there is evidence that they had begun to be used as a form of punishment.

By the time of the Edo Period (1603-1867), it’s believed that while tattoos had an association with criminals, decorative tattoos were also in fashion. Full-body tattoos, often featuring dragons, were popular on characters in Kabuki Theatre and in the Ukiyo-e woodblock art form.

The popular Chinese novel Suikoden featured many tattooed heroes and this only increased the demand. They were particularly popular amongst sailors, firefighters and other manual labourers as a spiritual means of protection. The recently formed Yakuza also took a liking to this permanent act of rebellion. As other forms of punishment overtook tattooing, it’s believed that convicted criminals sought decorative tattoos to literally cover-up their past sins.

Just as it changed almost everything else in the country, the arrival of foreign ships on Japanese shores in the 19th Century greatly altered the history of the tattoo. Fearing they would be seen as barbaric by the new arrivers, the Meiji government outlawed all tattoos and a lasting reputation was born. Though the Allied-occupation reversed this decision in 1948, a glut of gangster movies showed Yakuza bosses with tattoos and the link between criminality and tattoos was cemented in the minds of many.

Restrictions regarding tattoos in Japan

The fear of allowing in criminals, or of putting off customers who were scared themselves, caused many establishments to ban tattoos. The Confucian belief that your body was given to you by your ancestors and therefore, should not be tarnished meant that even the sight of a tattoo was upsetting for many people. 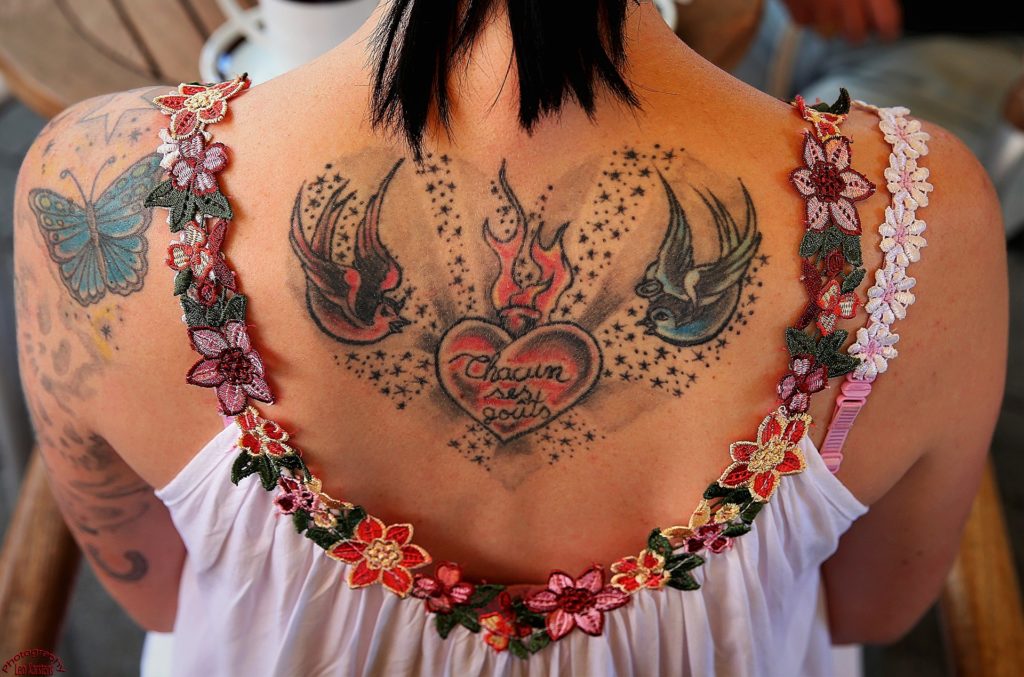 Onsens, public baths and swimming pools are the trickiest institutions to get into with a tattoo, even today. Getting access to a swimming pool is fine provided your tattoo is covered by your swimming suit but traditional onsens also forbid all clothing, so hiding a tattoo is impossible.

Attitudes are slowly changing and sometimes you can get away with wearing a bandage or protective sleeve. Alternatively, some sentos/ onsens were created specifically for those with tattoos, and there are also a lot of mixed-gender baths which allow you to wear a swim-suit. Anyone wanting to work in Japan should be even more cautious and will need to keep any tattoos covered, particularly when dealing with customers.

Future of tattoos in Japan

As Japan becomes increasingly flooded with tourists in the run-up to the 2020 Olympic Games, the debate has only intensified and it’s more important than ever to fully understand the country’s policy towards tattoos. Following the highly publicised case in 2013 of a New Zealand woman with traditional Maori tattoos being turned away, the government has tried to alleviate tourists’ concerns.

The tourism industry wants to capitalise on the influx of tourists by allowing them to use all of the country’s facilities, while the traditional onsens don’t want to risk alienating their steady local clientele. Added into this mix comes the ongoing court case in Osaka wherein many tattoo artists have been forced to stop practicing because of a 2001 law that stated only licensed doctors can use needles on others’ skin.

So, are there any tattoo restrictions in Japan?

The state of tattooing in Japan is no less confusing than ever. The best advice for any prospective tourist with visible tattoos is to be aware that you will be stared at and often given judging looks by a lot of people. Those with tattoos that can be covered should always check with an onsen before getting undressed and anyone tempted to get their first tattoo before a trip to the country, should perhaps consider waiting until they return. Nevertheless, following the 2020 Olympics, the blurred lines around tattoos are sure to be a lot clearer.