Perhaps the most iconic and globally recognized Japanese food, sushi is a must-eat while traveling in Japan. You may have eaten sushi elsewhere in the world as it is a very common global cuisine, but the sushi in Japan is vastly different, and a culinary experience that cannot be missed.

The History of Sushi

The origin of sushi come from Southeast Asia and it has gone through quite an evolution to modern day sushi. One of the key components of sushi is the rice, which is seasoned and prepared with vinegar. This was not always the case, in fact, vinegar only became a key ingredient during the Muromachi period (1336-1573). Prior to this, sushi was made using fermented rice and salted fish. Incorporating vinegar into the dish is still a nod to the past methods, as vinegar also preserves the rice but also adds a sour flavor. Throughout the Edo Period (1603-1868), there was a slight shift in the components of sushi, in that fresh fish was used rather than salted fish, and seaweed (nori) was added. 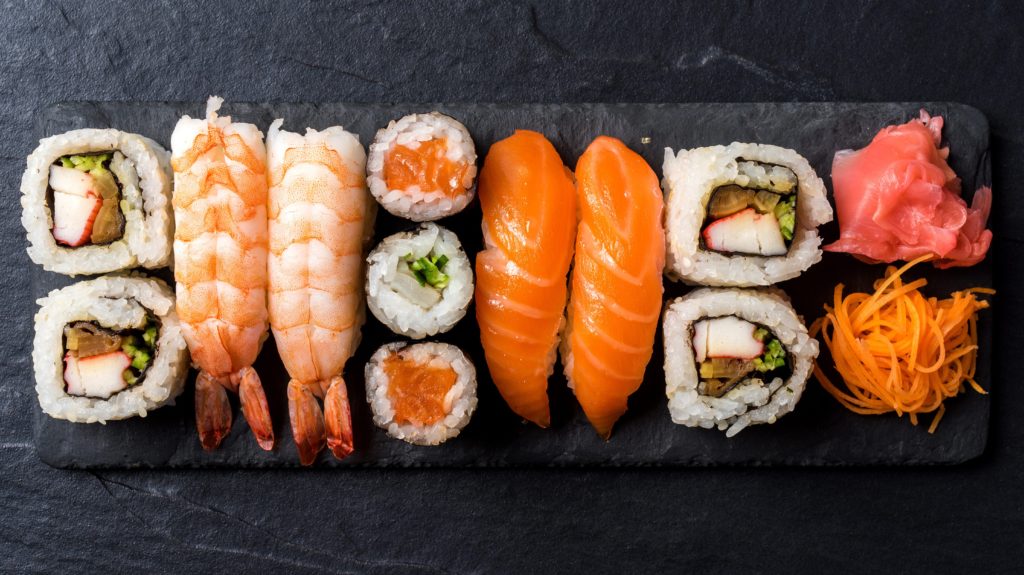 This form of sushi from the Edo period is the most similar to the sushi that is consumed today. Thanks to the sushi from the Edo era, modern-day sushi evolved. For example, in the past, the sushi makers needed to invent methods to preserve the sushi to keep longer, so they began to cure or pickle the vegetables and fish, along with cooking some components in vinegar or in soy sauce, many of those techniques are flavors can be seen today. In contrast, the sushi today is most popular with raw fish, although there are always options for enjoying fish that has been cooked or cured.

Like many traditional dishes, sushi is both a convenient street food as well as a delicacy and can range in variety and quality. There are also many different types and styles of sushi. One of the most popular is referred to as nigiri-zushi – a heap of rice, pressed together with a dollop of wasabi, and there are a variety of toppings, either fish or vegetable, or both that can be on top.

Another common form of sushi is maki-zushi which refers to the rolls of sushi which are wrapped in seaweed (nori). The most common types of maki rolls are usually tuna and cucumber rolls but there are many varieties and delicious combinations. There is another category called inari-zushi where rice is filled into deep-fried tofu skin pouches and sometimes filled with fish or vegetables. Chirashi-zushi – sometimes considered scattered sushi, is served either on a plate or inside a bowl where different types of fish or vegetable toppings are served on top of the rice. The common accouterment served with sushi is bright green wasabi, made from Japanese and pickled ginger. Additionally, sushi is often served with soy sauce along with green tea.

Where to find sushi in Japan?

As you explore throughout Japan, there are many places to find excellent sushi. For a lower-priced more affordable option it is best to look in places referred to as “Kaiten-Zushi”. There are types of restaurant establishments serve sushi on a conveyor belt which rotates through the restaurant and you take the food you want off the moving belt. If you do not see something you want on the conveyor belt, you can always order something specific, also if you really like something you ate off the belt, you can order more. This is an excellent way to sample many options and find out what type of sushi you like. Like most of the food in Japan, there are many varieties and it is recommended to try as many as possible to authentically experience the many sushi flavors, and some of the best sushi you will ever taste!

Looking for another way to enjoy sushi? Check out our Tsukiji Market and Sushi Making Tour.