Paris may have the Eiffel Tower and New York the Statue of Liberty, but here in Tokyo there are few more recognisable sights than the awe-inducing Shibuya Crossing. Most obviously seen when Scarlett Johansson strolled across it in ‘Lost in Translation’, the Fast and the Furious crew careened through it in ‘Tokyo Drift’ and from any Google image search of ‘Tokyo’, you have probably already marvelled at Shibuya’s focal point without realising it.

Located directly outside Shibuya station, this five-way convergence involves up to 2,500 people crossing the street at the same time, every two minutes of the day. It’s impossible to avoid during a visit to the Shibuya area but there is much to do once you’ve crossed this pedestrian sea.

Beginning as a humble train stop, Shibuya proved incredibly useful as a halfway point between Akabane in the north and Shinagawa in the south, and between eastern Tokyo and Yokohama. Benefiting from a post-war boost in industry and a post-Olympics boost following Tokyo’s hosting in 1964, Shibuya began to rival neighbouring Shinjuku as one of the modern entertainment capitals of western Tokyo.

Tokyo’s most famous dog, Hachikō, tragically waited at this station everyday for his deceased master between 1923 and 1935, becoming a folk hero with a Hollywood film (starring Richard Gere) being written about him. The Hachikō Statue next to Shibuya Crossing still stands today as one of the city’s most endearing landmarks and most important meeting points in the this hectic locale.

The last few decades have witnessed a significant concentration of growth, starting from the station and spreading out in all directions. Nowadays, Shibuya is a crucial commuter hub, one of the most fashionable neighbourhoods for Japanese youth culture and one of the most popular spots for foreign visitors.

If it weren’t for the vast grounds of Yoyogi Park separating them, the urban sprawl of Shibuya and Shinjuku would probably have become one already. The focal point of Shibuya is just 10 minutes by train to the south of Shinjuku, but the actual ward occupies a much greater region including Ebisu and the greater Yoyogi area to the north-west. There are plenty of different train stations and subway stations within central Shibuya but both Harajuku and Roppongi are within easy walking distance.

What to do in Shibuya

Despite so many people needing to cross the road at the world’s busiest intersection, so many people come here precisely because they want to do so as well. The best views of the crossing, however, are from the bay windows inside the station and the Starbucks over the road.

There are countless different bars in Shibuya and live music venues to escape the crowds but nowhere quite as surreal as Nonbei Yokocho, or ‘Drunkards’ Alley’. Just a short stumble under the tracks from the station is one of Tokyo’s most famous drinking alleyways, with a dozen or so tiny bars housed on top of one another. Another great spot, albeit a much more modern one, is ‘Living Room Cafe’ which offers live music at almost all hours of the day and a relaxed setting.

The curious can also have a look at Dogenzaka, or ‘Love Hotel Hill’ as it is commonly known, and try to catch a glimpse of the many patrons discreetly coming and going.

Shoppers in search of something distinctly Japanese, or distinctly cheap, will love shopping in Shibuya. 109 department store is one of the city’s best known department stores to buy the latest fashion while Bingo is one of its best kept secrets for used clothing. Mandarake has all the Anime goodies you could ever want and Tower Records is, put simply, has the best collection of records in the city and (literally) towers over Shibuya, offering great views from its rooftop. 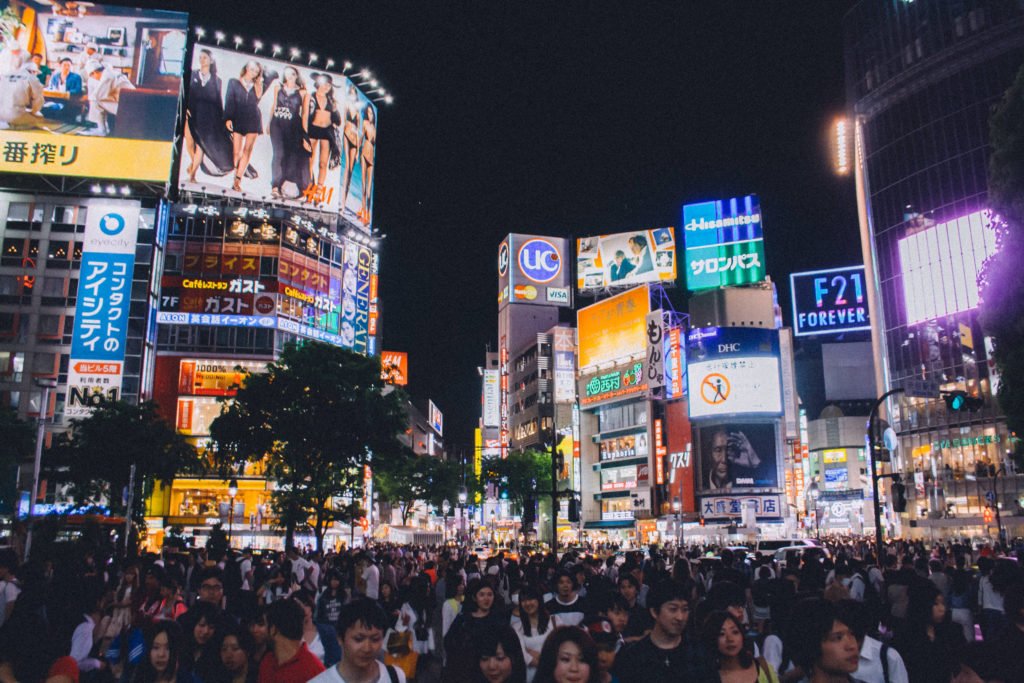 How to visit Shibuya

There are plenty of places in the Shibuya area to stay, for example many boutique hotels, and it’s a great place to base yourself during a trip to Tokyo. If you happen to be in town for either Halloween or New Years’ Eve, you will be witness to one of the most incredible experiences of your life as thousands of people flock to the crossing en masse.

Those who wish to see Shibuya without the throngs of people should come either late at night or very early in the morning.

The crossing may be at the top of many people’s Japanese ‘Bucket List’, but the whole area of Shibuya is one that should be explored. Just be warned that any trip here will almost certainly start, and end, with the most memorable street you’re ever likely to encounter.