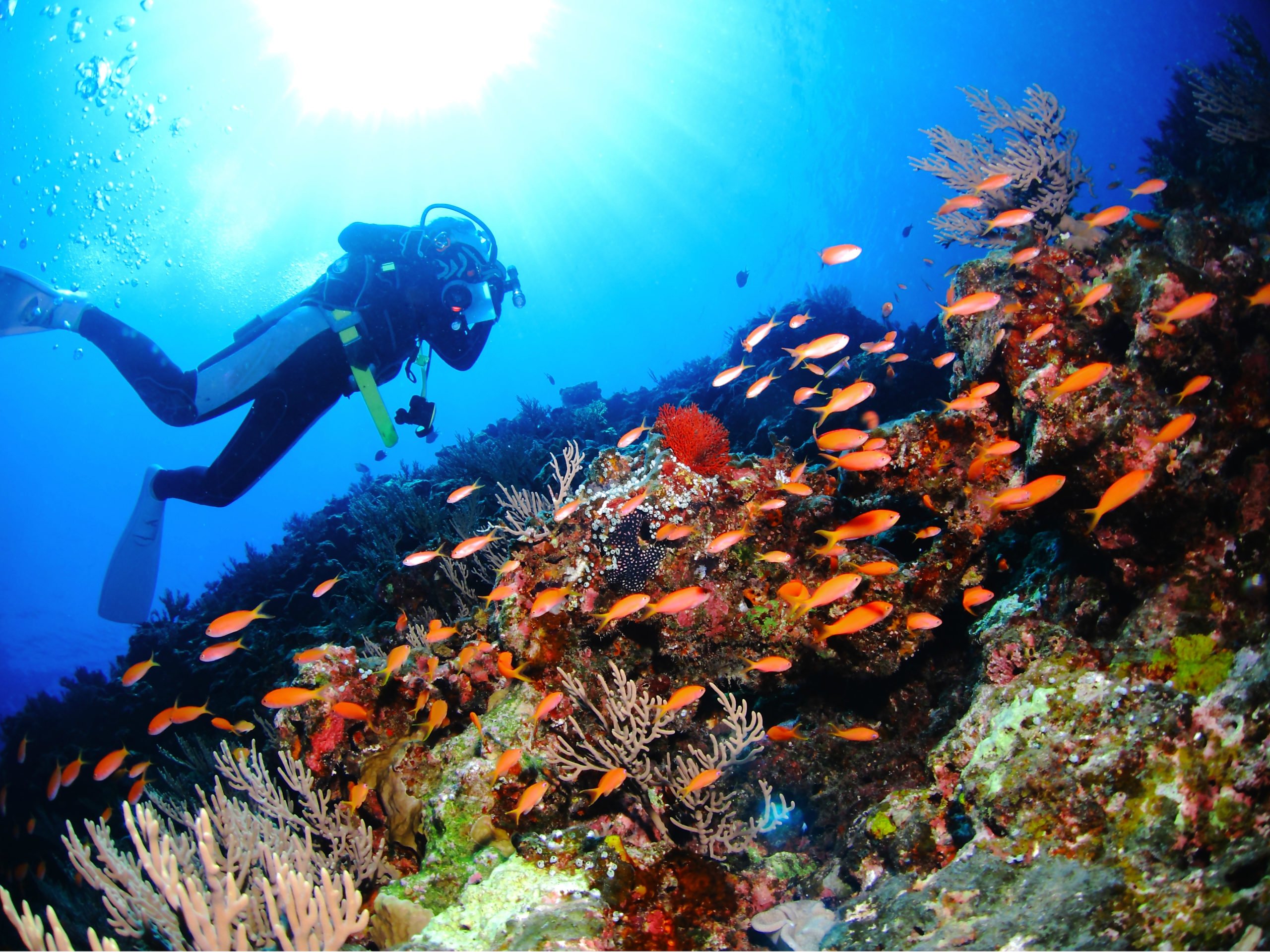 Japan has some 30,000 kilometers of coastline, making it an ideal surf and scuba diving destination. Most scuba divers tend to gravitate to the southern region of Japan, like Okinawa, where the climate and water are warmer. Regardless of which part of Japan divers choose, there is plenty of marine life and magic to be found beneath the surface. Here are some of the places offering the best scuba diving in Japan.

Ishigaki Island is situated in the Okinawa prefecture, and one of the best places for scuba diving in Japan. The area is particularly known for the manta rays, and divers of all skill levels flock to this region specifically to spot and swim with the manta rays. The famous Manta Scramble is a gathering of mantra rays who come to the area to feed on plankton, and scuba divers can get up close and personal with the impressive creatures. The area south of Tokyo is also notable for the crystal clear water, and the tropical reef. Beyond the clear waters, the sandy shores at the beach of Kabira Bay are beautiful and relaxing.

Located southwest of the main island of Okinawa, Miyako Island is also known for the pristine, crystal clear waters. Scuba divers in the area can enjoy the breathtaking coral reefs, along with sea turtles and other marine life. The Miyako Islands are actually made up of six islands, including the main island itself. Impressively, these islands are made of coral limestone and due to the constant erosion from waves, sea water and rain, the shapes and land-forms are quite striking and unusual. The most popular dive spots include Shimoji Island and Irabu Island. It is only possible to reach the island region by plane, including flights from Naha as well as Tokyo for those looking to enjoy scuba diving in Japan.

Situated just 40 km from Naha, the Kerama Islands consist of a collection of 22 islands and rocky reefs, you can read more about the area in our article about Okinama. The larger islands of Tokashiki, Zamami, and Aka are the most popular and are easiest to access via high-speed ferry. The water surrounding the Kerama Islands is famous for its color and clarity, which is known as “Kerama blue” and is famous around the world, making it a particularly popular destination for scuba divers in Japan, and around the globe. The best time to visit the island region is in mid-April when the water begins to warm up.

For scuba divers seeking underwater treasures beyond marine life and coral reefs, Kouri Island is known for the shipwreck of an American submarine the USS Emmons. Hit by five kamikaze planes, the submarine was destroyed intentionally by American troops so that the Japanese could not get a hold of it later. Due to the depth of the shipwreck ( approximately 35-45 meter below the shore), this site is not for beginner divers.

The island area situated on the southern shore of Tokyo is known as  the “Galapagos of the Orient” and attracts many scuba divers to the region, we provide a curated list of the city’s best hotels if you’re planning to stay for a bit. This area is particularly well known for those wishing to see manta rays, dolphins and whales. Due to the extensive marine life and natural beauty in this area, it has been preserved as a UNESCO World Heritage site. The Ogasawara islands are found some 1000 km south of Tokyo, making it slightly difficult to access, and there is no airport, making it impossible to fly to the islands. From Takeshiba Sanbashi in Tokyo, a lengthy ferry ride (overnight, approximately 26 hours) can be taken for those wishing to reach the region. Although it is difficult to reach, for those seeking a truly magical experience both above and below the shores, Chichijima offers some of the best scuba diving in Japan and just requires some advanced planning to coordinate with the sporadic ferry schedule.