Not to be confused with Sushi, Sashimi refers to raw fish or raw meat that is thinly sliced and eaten on its own, oftentimes dipped in soy sauce or ponzu sauce. The concept of eating sashimi, like many traditional Japanese foods, has a long history that dates back thousands of years. Originally, the idea of eating raw fish came from China and was adopted by the Japanese and quickly utilized in Japanese cuisine.

Sashimi can be in reference to all types of raw meat which can be eaten. Oftentimes the meat is fish, beef or chicken, and the meat is strategically cut into thin slices that are small and bite-sized. Alternatively, and depending on the specific meat, the slices can be various shapes including diamond and rectangles, small cubes or thin slivers, it all depends on the best way to maximize on the meat and enjoy eating it with ease. 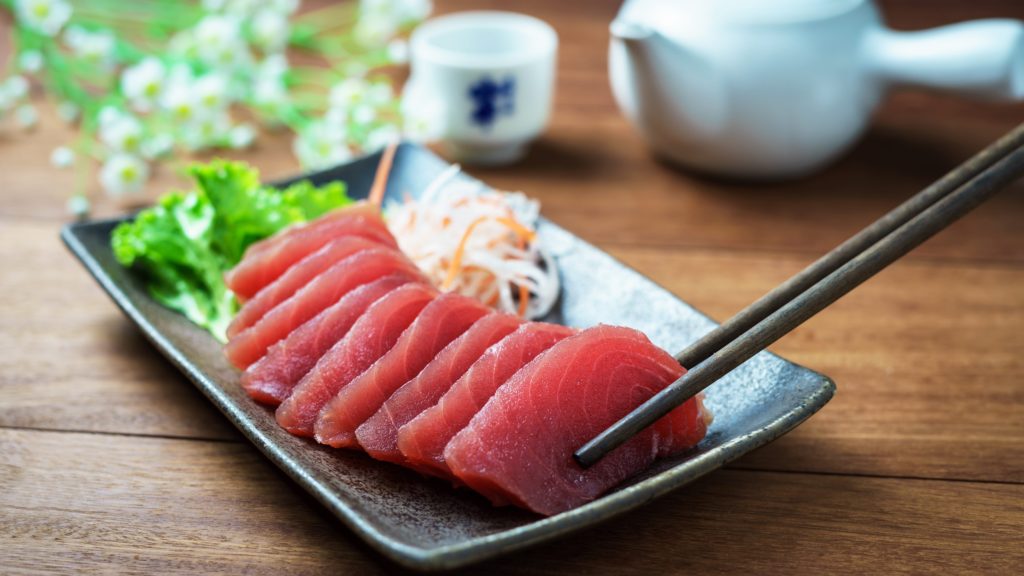 Sashimi is considered a delicacy, and the high-quality meat or fish is often served with a garnish, on ice, or simply on its own. Sashimi may also be plated with the tails or the heads of the fish that the flesh was cut from. Sashimi is meant to be enjoyed, and eaten with chopsticks. When eating sashimi, it is important not to dip in too much sauce as the taste of the fish is meant to be the focus. The idea it to showcase the quality and taste of the fish without needing much else.

In Tokyo, and throughout Japan, there are many restaurants serving sashimi and plenty of options, from lower-priced establishments to ambient dining. It is worth noting that the quality of the fish will differ, and the price is correlated to the quality of the fish. It is a special experience to eat fresh, high-quality sashimi and worth splurging at least one while traveling to get an authentically delicious experience!