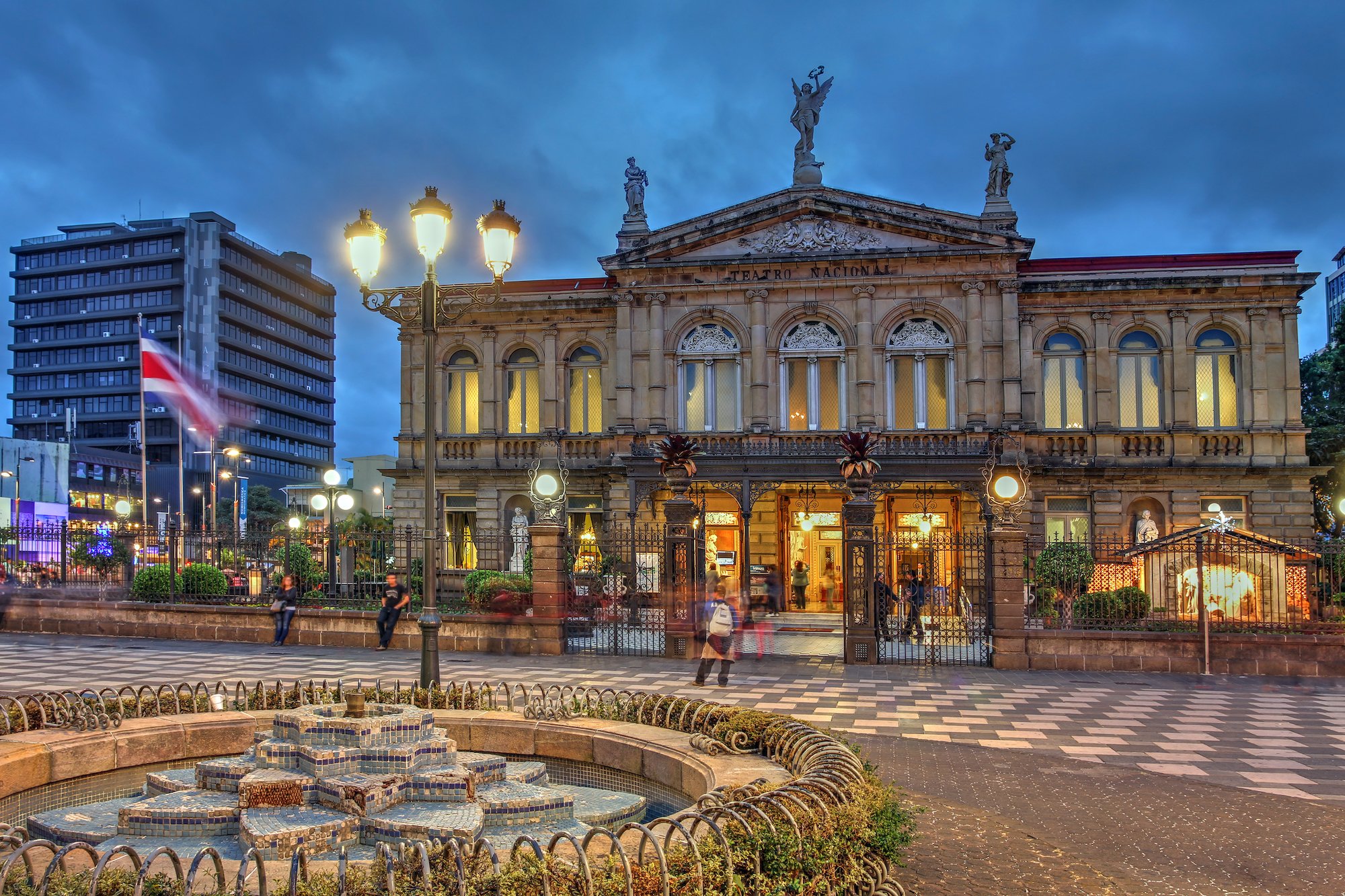 Costa Rica is better known for its rainforests, coffee, and sandy beaches than for its architecture, but in the burgeoning city of San José this is changing. Our San José Design Guide offers a bucket-list for enthusiasts to explore the capital city. The skyline boasts an interesting fusion of eclectic architectural styles with a mix of contemporary skyscrapers and Colonial mansions. This popular cultural destination is abundant with art galleries, theatres, and hotels, all telling a story about the country’s rich history. If doing it on your own is too much, try our ultimate San José tour.

Downtown San José is home to the National Theatre, the city’s main performing arts venue which dates to the 1890s. Constructed to resemble a Parisian opera house, it was the second theatre in the world to be illuminated by the electric light bulb. The first performance, Goethe’s Faust in 1897, attracted audiences from all across the city. Today, over a century later, it’s still one of the finest historic buildings and centers for the arts in San José.  The exterior of the National Theatre is impressive but the interior is truly exceptional, with lavish décor and intricate gold leaf detailing on every corniche and door frame. The lobby is adorned with statues of world-famous composers and inside the foyer and auditorium ceiling frescos are illuminated by the light of dazzling chandeliers. Furnishings hark to a bygone era with velvet fabric topped with golden sculptures and there is even something special for those with an interest in symbolism and art. See if you can spot the secret in the ceiling mural!

Your second port of call should be the National Museum of Costa Rica. The ochre and white trimmed fortress was built in 1917 and used as barracks for soldiers during Costa Rica’s civil war. As a stark reminder of the city’s tumultuous past, bullet holes remain in the exterior walls from the same time. The museum contains a plethora of pre-Columbian artifacts and archaeological finds, but some of the most interesting design aspects can be found in ‘sala de oro’ or the ‘room of gold’ and the Colonial room, showcasing a collection of period furniture and decorated to emulate 18th century living quarters.

The National Arts and Culture Centre will impress design aficionados. Housed in an old liquor factory and constructed in colonial style, it features a brick courtyard and even its own amphitheater.

The charming residential district of Barrio Amón displays a selection of fine houses and Neo-Victorian architecture. As you stroll through the area, you will see that many historic mansions have now been transformed into quirky art studios and galleries. Throughout the neighborhood murals created by local artist Fernando Matamoros span walls depicting traditional scenes of Costa Rican life.

If you seek traditional arts and crafts, pay a visit to Galeria Namu. Specializing in folk and indigenous art, this store sells handmade crafts made by indigenous tribes of Central America. Showcasing a selection of Wounaan baskets, Pre-Columbian artifacts, Tagua figurines, and Brunka masks, you can purchase genuine art, crafts, antiques, and jewelry to take back home.

San José is abundant with superb restaurants but if you’re seeking architecturally interesting, atmospheric dining, Restaurant La Silvestre is a good place to start. The main dining room is akin to stepping back in time, into the lounge of an affluent city resident. Abstract art, black and white photographs, and antique furnishings bedeck the room bringing a homely, cosy feeling. The cuisine of La Silvestre is typically Costa Rican, created with a modern twist and if you wish to immerse yourself fully in the experience, take a 6-course culinary trip through the flavours and folklore of Costa Rica courtesy of the degustation menu.

Nestled in downtown San José, Tin Jo has long been one of the capital’s most popular Asian restaurants. Now owned and run by a second-generation Chinese family, the eatery boasts an extensive menu catering to carnivores, gluten-free, vegan, and vegetarian diets. Different dining areas feature unique décor from China, Malaysia, Thailand, India, and Japan so you can admire the design elements as you feast on delicious, creative dishes from a variety of countries.

History and design connoisseurs will adore the Hotel Grano de Oro. The San José hotel was originally an early 20th-century Victorian residence belonging to the Pozuelo family who made it their beautiful home in the city. In 1991, the ‘Grain of Gold’ hotel opened its doors as an upscale boutique establishment. Although thoroughly modernized, the owners have kept the essence of the building the same. Its renowned restaurant was modeled on the original Pozuelo house with an elegant dining room, inner courtyard, and handcrafted bar.

Set high in verdant mountains of the Central Valley a short drive from the city is the chic boutique Hotel Alta Las Palomas. This stunning hotel blends Colonial-era architecture with 1920s signature pieces and industrial elements which result in an architectural delight. The hideaway has hosted a variety of Hollywood stars, writers, and musicians who come to relax here after touchdown before moving to beach and cloud forest resorts. Guest accommodations are eloquently designed with understated glamour in mind, punctuated with Art Nouveau touches and signature furniture pieces. The outdoor swimming pool, flanked by swaying palms and atmospheric lighting, is a wonderful place to sit back and relax with a cocktail, glimpsing the twinkling lights of urban San José in the distance.