A bizarre, morbid, and unusual site, Mount Osorezan is also referred to as “Fear Mountain”, and the name stems from both the geographical location and the legends that surround the site, which is said to be the entrance to hell. 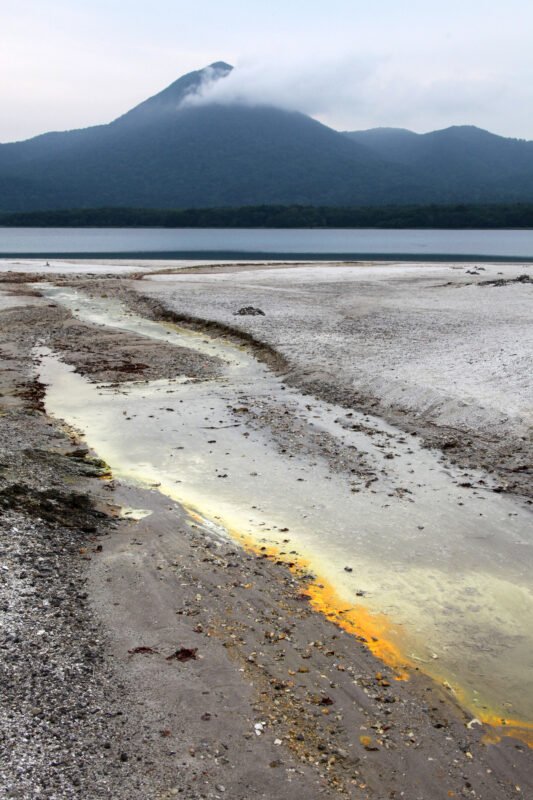 The volcanic region, mountain peak date back some 10,000 years ago, the last time that Mount Osore erupted. The Mount sits some 879 meters high and is known for the continued emission of sulfur dioxide, meaning it is still technically an active volcano. The sulfuric deposits were notable during the Meiji period when the production of gunpowder was relevant and necessary for the military. To this day, the area maintains a strong smell due to the sulfur.

Beyond its geographical elements, Mount Ozorezan also holds a putrid smell, due to the presence of sulfur, and surrounding volcanic activity. Additionally, the area appears similar to the description of the Buddhist afterlife. The somber site attracts not only tourists but also brings locals who are grieving and saying goodbye to loved ones, specifically children who have departed. As a result, it is commonplace to see a variety of monuments, mausoleums, and memorial statues surrounding the area. In the area, there is also a traditional Buddhist temple which provides a place for those mourning to pray.

What to do at Ozorezan

Although Ozorezan is a rather morbid location, it is still an attraction. Given its remote location, it can be harder to access, but visitors to the area can also enjoy overnight accommodation making the journey worthwhile. Visitors can partake in morning prayers as well as enjoy access to the soothing hot spring baths which are found on the grounds.

During the summer months, in July, the Bodaiji festival takes place which serves to connect those who are grieving with the souls of their loved ones. During the festival, this is specially done by Itako, blind women who serve as mediums to the afterlife. Prior to the festival, there is a cleansing process and many rituals which prepare for this event. Ozorezan is particularly popular during the Bodaiji festival.

To access Osorezan, travelers must go via the Shimokita Peninsula. There are several daily buses that travel between Mutsu Bus Station, Shimokita Station and Osorezan.