Though first-time visitors to Japan may have never heard of Nara or considered putting it on their bucket-list, they have no doubt seen footage from this historical marvel before. The free-roaming deer of Nara beside its towering wooden temples is inevitably shown on every Japanese-based documentary and tourist program. Those wanting to (slightly) escape the tourist trail and get away from the crowds, should look no further than stately Nara.

Despite only lasting 84 years (from 710-794), the period of time that Nara served as Japan’s capital has had a profound impact ever since. It was the first real capital-city as the population boomed, thousands of jobs were created and a vast number of temples were constructed. During the ‘Nara period’, Japan fully embraced Buddhism for the first time and it was around this time that the first historical records of the country were written, giving birth to many of the myths surrounding Japan’s birth.

Nara’s legacy endures because so many of the great temples built during this period have lasted, giving tourists an incredible insight into life in the 8th Century. The Japanese god of thunder, Takemikazuchi, is believed to have arrived in Nara on a white deer to protect the city and since then, deer have enjoyed a sacred status within the city limits, still roaming free around the area today.

In terms of historical significance for ancient Japan, Nara should be right up alongside Kyoto on any trip itinerary. It may lack some of Kyoto’s mystery, elegance and otherworldly natural attractions, but it is just as important and its temples are just as impressive. Not to mention that it’s much less touristy than Kyoto. Nara is most famous for two things: deer and temples, and it does these two things rather well.

What to do in Nara

Many of Nara’s best sights are situated within Nara Park, along with its famous deer, and any trip to the city should start here. There are plenty of things to see in Nara Park, besides feed the deer, and the Horyuji Temple which contains the world’s oldest wooden buildings, should be visited.

Undoubtedly the main attraction of Nara is the Todai-ji Temple and its stunning main hall which is the largest wooden building in the world, housing a giant ‘Daibutsu’ (Buddha) bronze statue. It’s here that the spectacular Omizutori festival is held every year involving large torches, and it’s atop nearby Mount Wakakusa that the Yamayaki festival takes place which involves setting fire to the mountain’s grass. 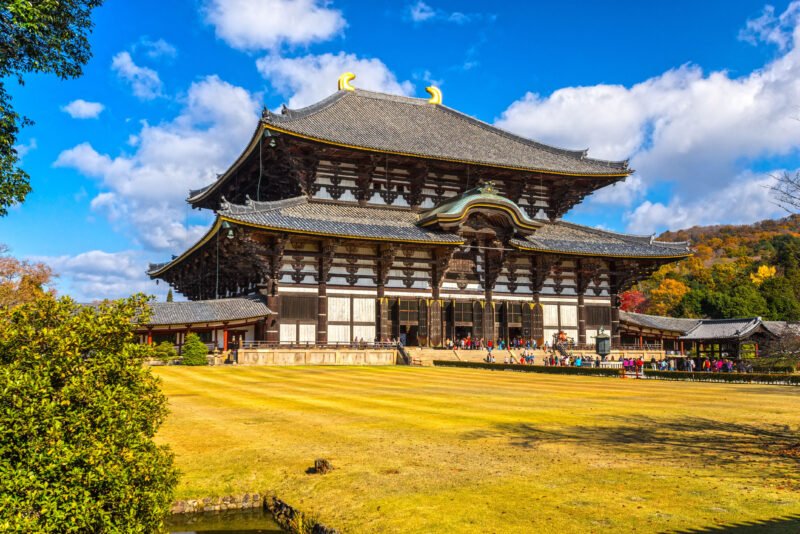 How to visit Nara

Due to its convenient location within Kansai, Nara is easily reached from any one of a number of destinations. Unless you’re really interested in the Nara period of Japanese history, don’t plan on spending more than a day or two in the vicinity. Nara is a peaceful and pleasant escape from Honshu’s more dazzling highlights but it’s a fairly small city, with all that that entails.

How to get to Nara

Though Nara Prefecture stretches practically from Kyoto to the north to the Pacific Ocean, the city is tucked up in the North-West corner of the region. It is conveniently located in Kansai, almost becoming part of the Keihanshin metropolis that incorporates Osaka, Kyoto and Kobe.

Therefore, Nara is a regular stop for tourists being so close to this popular area, and is also easily reached from both Nagoya, and Tokyo, though it’s slightly further afield. One of the few tourist-oriented cities in Japan that doesn’t have access to the sea, Nara is also comparatively small so you won’t feel too landlocked.