Arguably one of the most quintessential Japanese foods, miso soup is very traditional, and while it may appear to be a simple soup, it actually requires a great deal of refinement and skill to produce the stock known as dashi. Miso soup has been a long-standing favorite in Japan and unites people as it is enjoyed from any class, a popular dish among royalty for centuries and also eaten by commoners.

Depending on the specific region the particular ingredients may vary, but dashi stock is usually made from either kelp or fish to create the body of the soup stock. Miso paste which is made from fermented soybeans is also added to the stock. Sometimes dried fish such as baby sardines (niboshi) is added, or thin shavings of dried tuna (bonito) can be added to the miso soup stock. Additionally, vegetable elements can also be added such as dried mushrooms, often shitake variety and dried kelp (kombu). In fact, if the broth is made vegetarian, it is referred to as kombu broth incorporating the kelp along with mushrooms. The combination of these elements is meant to create the umami flavor, referring to a taste which is a combination of sweet, salty, bitter and sour. 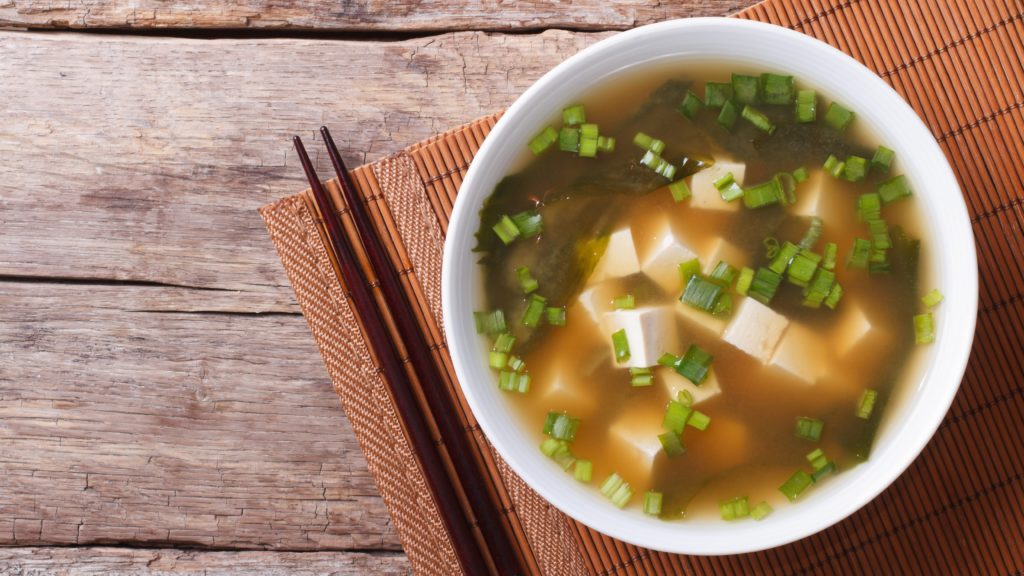 Beyond the soup stock, other elements are added to the miso soup broth such as thinly sliced green onions, tofu and sometimes other seafood such as clams or meat such as pork to add depth and flavor to the soup. These additions also relate to the season, as items that are fresh and in season may be added accordingly.

How to eat Miso Soup

The preparation and serving of miso soup can also vary, but traditionally the soup is served in small lacquer bowls. Oftentimes the bowls may have lids which allow for the soup broth to be drunk with ease. The soup is also eaten with chopsticks to eat the large ingredients floating in the broth.

While traveling in Japan, you will likely come across miso soup as part of a bento box, or in addition to other meals, including breakfast. In fact, given the health benefits, miso soup is often enjoyed in Japan as a healthy, filling and nutrient-rich breakfast.

Beyond being delicious, miso soup offers a variety of health benefits which makes it even more appealing. The miso paste is rich in B vitamins as well as K vitamins, E vitamins, and folic acid. This is due to the fermented soy, which also provides healthy bacteria which promotes gut health. Miso soup is linked not only to Japanese food culture but is upheld as a part of a healthy and balanced life.