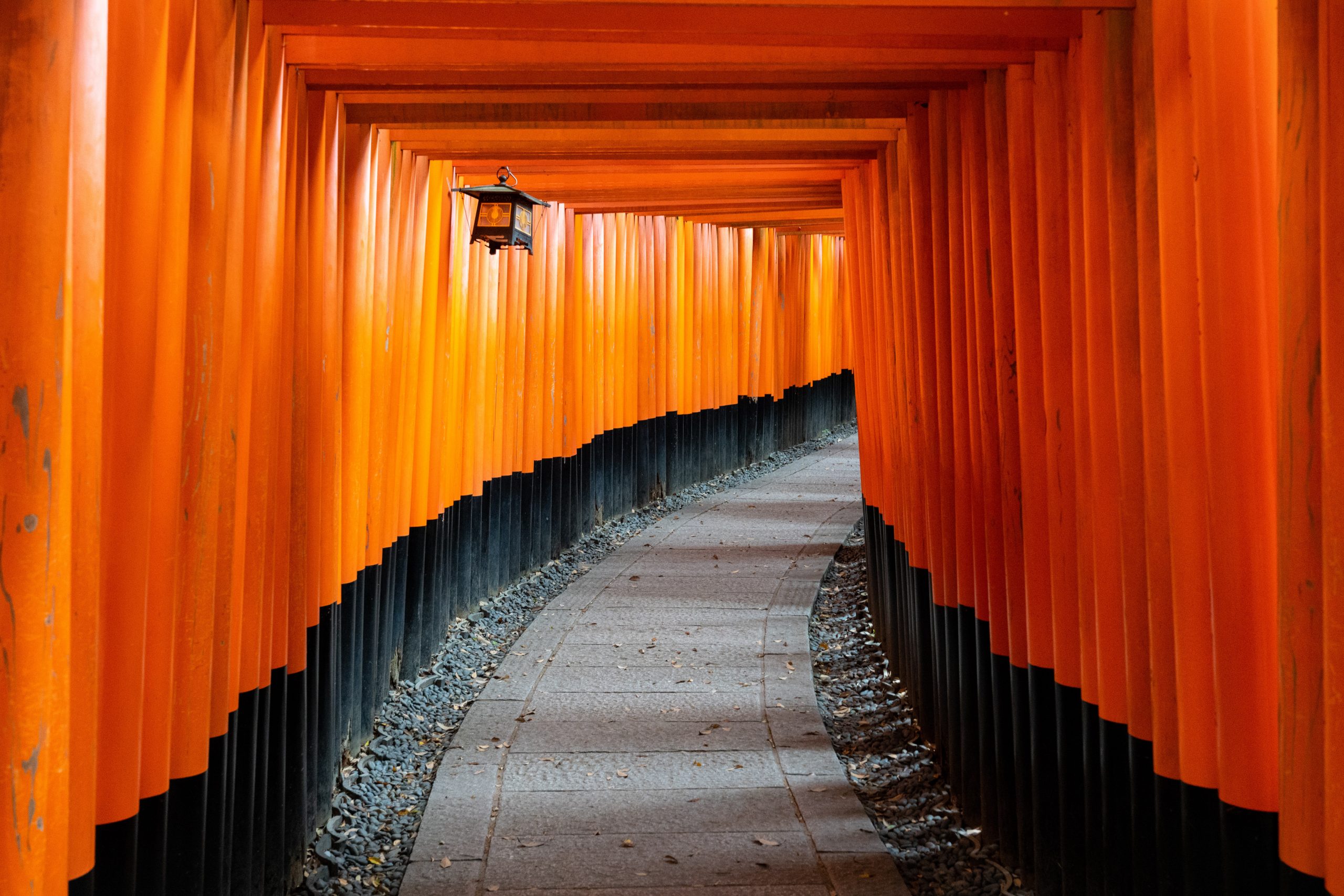 Kyoto might be small in its size and clamor, but its abundance lies in its perfect aesthetics, rich history, and preserved architecture. Whereas in Tokyo, the excitement of the city’s bright lights and soaring skyscrapers surround you, in Kyoto you’ll make your way through a different sort of theme park. The birthplace of some of Japan’s most admired artists, Kyoto will blow you away with its artistry and craft. The former capital of Japan is an absolute utopia for design lovers. Here is our design guide for seeing the most exquisite sites in Kyoto.

One of the most beautiful temples to see is Jojakko-ji, located at the base of the Kokura-San Mountain. The serene temple was constructed in the late 1500s. Set among a stunning backdrop, it offers arresting views of Arashiyama and Kyoto.

The UNESCO Kiyomizu-Dera temple, which translates as “Pure Water Temple”, was constructed in the year 780. Its intricate structure and design make this a top site for design enthusiasts. It is famous for its large wooden stage which provides stellar views of the maple and cherry trees, especially during the fall and spring, respectively. The temple houses the eleven-faced Kannon, its main focus of worship.

A must-see shrine in Kyoto is Fushimi Inari-Taisha. The shrine attracts both design fanatics and Instagram influencers alike thanks to its thousands of vermilion torii gates that border the path.

Design lovers can’t miss Heian Jingu Shrine. Built in 1894 to commemorate the 1100th anniversary of Kyoto as Japan’s capital, the shrine is a small-scale copy of the former Heian Palace from ancient Kyoto. The shrine represents the architecture from the Heian Period and the nagare-zukuri traditional Shinto shrine architecture that was common during Kyoto’s Golden Age.

The Shimogamo Shrine is another shrine which is well worth a visit. Set among an idyllic forest, it is one of Japan’s oldest shrines, constructed during the 6th century. It is characterized by its asymmetrical gabled roof, a quality of the nagare-zukuri style from the Heian period.

Every visit to a Buddhist temple in Kyoto offers a 2 for 1 deal; you also earn a visit to a divine garden. Considering that Kyoto is the epicenter of Zen Buddhism in Japan, there are an abundance of exquisite Zen gardens. Many of these gardens are “karesansui” gardens, or Japanese rock gardens. These specialized gardens create the illusion of water without incorporating water in their design. They use minimalist qualities like gravel, moss, and the strategically arranged rocks to imitate ripples in water. They may also feature some greenery and trees. The gardens are known for their simplicity, elegance, and restraint.

The most famous karesansui garden in Kyoto is at the Ryoan-ji Temple. The temple was constructed in the late 15th century. The garden covers an area of 340 square meters and contains fifteen mysterious stones of varying sizes. The garden is intended to be seen from the veranda of the hojo. Considering that it is the most famous Zen garden, keep in mind that it gets crowded. Arrive early in the morning, as getting a piece of silence at a garden is critical for the complete experience.

Another beautiful garden to check out in Kyoto is the Tofuku-ji Temple. The spacious garden was designed by Shigemori Mirei in the 1930s. It surrounds the temple on all sides, with each garden featuring different qualities like pebbles, moss, trees, and checkered patterns. One of the best perks of the garden? It is typically less crowded, except during autumn when the leaves change colors and crowds flock to take in the orange and red maple leaves.

The Kyoto Concert Hall opened in 1995 to celebrate the 1,200th anniversary of Japan’s former capital, Kyoto. The hall was designed by the acclaimed Arata Isozaki, who was inspired to create a modern version of a traditional Japanese garden. The 5-story building is surrounded by granite bridges and stone sculptures and has a foyer made of Florentine limestone. The building is home to the Kyoto Symphony Orchestra. It is decorated with sculptures and twelve pillars, representing the twelve zodiac signs. Most fascinating in the concert hall is the auditorium, which was built in a shoebox style and contains modern details and acoustics.

The Kyoto Imperial Palace is another monumental building in Kyoto, which functioned as the residence of the Imperial family until 1868. The palace was originally built in 794, with the present palace built in 1855. Its design is an imitation of the Heian Period. Nowadays, the building is used for official ceremonies and inaugurations. The wooden structure appears almost blocked off due to its high walls and gates. The palace grounds are the only area of the palace that the public can access – but don’t be deterred, a visit to take in the palace’s exterior is worth the trip.

The UNESCO Nijo Castle was constructed in 1603 by Tokugawa Leyasu and still remains in its original form. It originally served as the residence of the first shogun of the Edo Era and was later converted to a palace. The castle was built to show off the shogun’s wealth and power. It is an excellent example of Japanese architecture, in particular of architecture from the feudal era.

The Kyoto Municipal Museum of Art is one of the oldest art museums in Japan. The European-style brick building houses an extensive collection of contemporary Japanese art.

The National Museum of Modern Art has been popularized because of its unique architectural design. Designed by Japanese architect Fumihiko Mako, the museum is houses Japanese and western art including paintings, prints, sculpture, crafts and photography.

The Kyoto Tower is a landmark in Kyoto and stands out for its stark modernity in the ancient city. The tallest building in the city offers sweeping views of Kyoto. Mamoru Yamada designed the tower to mimic a Japanese candle, but the tower’s introduction to the city was met with harsh criticism. Many felt that the steel needle-shaped structure detracted from the ancient capital’s authenticity.

Near the Kyoto Tower you’ll find the Kyoto Station, another impressive structure which contrasts remarkably from traditional Kyoto. The all-steel, futuristic architecture was designed by Hara Kiroshi. The main hall of the station is called the “Matrix” because of its labyrinth maze.

The Katsura Rikyu, or Imperial Villa, is one of the most extraordinary examples of Japanese architecture. It was constructed in 1645 as the residence for Japan’s imperial family. Its stunning gardens are considered a triumph of Japanese gardening. To visit the villa, you must join a tour. Although you can’t go inside the buildings, taking in its striking exterior is well worth the visit.

Kyoto offers many different types of accommodation which are in themselves design masterpieces. Spend a night in traditional Machiya, wooden Japanese townhouses found among many of Kyoto’s side streets. Most of the Machiya are equipped with traditional Japanese features like tatami mat rooms and Japanese-style baths. Some even feature mini Zen gardens and outdoor baths.

Kyoto also boasts a number of modern hotels, like the new Ace Hotel which will be opening in April 2020. Designed by Japanese architect Kengo Kuma, the 213-room hotel features landscaped gardens, restaurants, and communal spaces. The hotel incorporates nature, art, culture, and history in its design.

The Ninja Black hotel is a tiny hotel composed of 21 rooms. The face of the building is covered by koushi, Japanese style louvers. As the customer enters the hotel and makes their way to the front desk, they are presented with a solid wall of gold leaf. A front desk employee suddenly appears through an invisible swinging door, meant to create for guests the ultimate ninja experience. There are also optical illusion pictures of ninjas projected on the hotel’s walls.

Restaurants and cafes in Kyoto incorporate detailed designs in their structures and are a form of art themselves. The Japanese cheese tart shop “Bake” displays its tarts on a counter built entirely out of Legos. The counter was designed by Tokyo-based Yusuke Seki.

At ‘Yakiniku Yazawa’ you’ll feast on Japanese BBQ in a space designed with authentic details to give diners a more traditional experience. The interior is minimal and seats are separated by bamboo blinds. There is a private room with views of the traditional indoor garden, for those wanting a more exclusive and luxurious experience.

Kyoto is one of the best cities to experience kaiseki, the traditional Japanese tasting menu. Visit Ishibekoji Kamikura in Gion or Guilo Guilo Hitoshina and try a variety of dishes made with local Japanese ingredients. You may find yourself eating beef, sashimi, and other Japanese delicacies.