The city of Kobe is most famous thanks to its beef and the superstar basketballer Kobe Bryant who is reportedly named after the beef. That being said, the real Kobe is one steeped in history, with plenty of things to do for the inquisitive traveller, and great food as well.

Kobe is a city with a distinctly international feel to it, in contrast to lots of rural Kansai. It’s home to the Jazz Street Festival, a yearly fashion show and the Vissel Kobe and Orix Buffaloes football and baseball teams. It is also the site of Japan’s first Sikh temple and mosque.

Similarly to Osaka, Kobe grew as a result of trade with Chinese and Korean visitors and was even known as Hyōgo-tsu (Hyōgo Port) in the 13th Century because of the prominence of incoming ships and merchants. ‘Kobe’ wasn’t founded until 1889, when the Meiji Restoration re-opened Japan to the world allowing Kobe to be one of the first cities to open its ports (and doors) to the new arrivals.

Incendiary bombs in 1945 and the Great Hanshin Earthquake of 1995 did much to alter the city’s landscape and identity, but today it still remains a diverse and welcoming city to visitors all year round.

What to do in Kobe

The compact city centre of Kobe is home to one of only three Chinatowns in the country, the striking Kobe Port Tower and several museums. The artificial Port Island can be reached very easily from the mainland and contains a number of the city’s best museums and the Kobe Animal Kingdom.

Slightly further north of the centre lies the Nunobiki Falls (great views and a pleasant hike) and the Shin-Kobe Ropeway (great views without needing to hike). Even further away from the shore is the imposing Mount Rokko and hidden behind the mountain is the famous Arima Onsen town resort.

While in the home of Kobe Beef, it would be imprudent not to sample a taste of this most famous breed of Wagyu beef. When served abroad, Kobe Beef is a very expensive dish but here in its heartland, it’s possible to eat well without spending too much. Vegetarians and vegans don’t be put off, Kobe has plenty of dining alternatives besides meat.

Located to the west of Osaka bay, Kobe is spread out thinly along the coast. The Ikuta Shrine, which gave Kobe its name, is located in the centre, while the Rokko mountain range dominates the skyline to the north. It is sandwiched between the city of Ashiya in the east and Akashi in the west, and is connected to Awaji Island (and eventually the island of Shikoku) by the Akashi-Kaikyo Bridge. 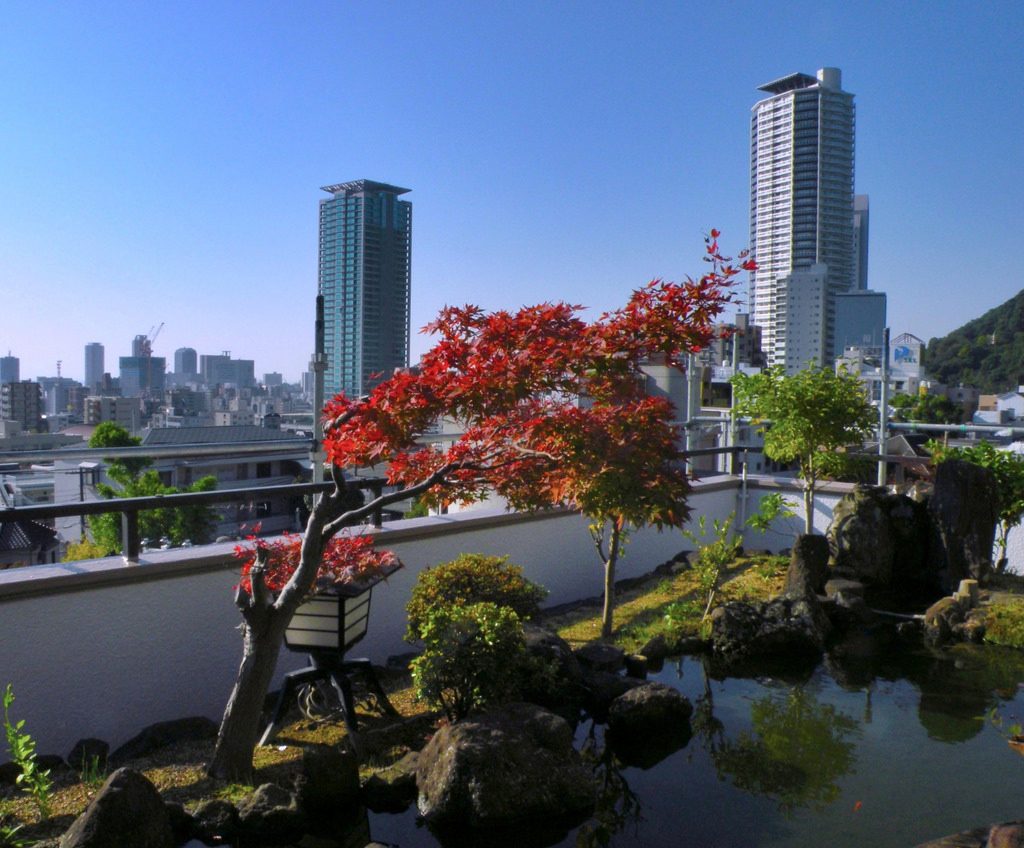 The Kobe Airport, perched on a man-made island in Osaka Bay, handles domestic flights only but the city can be reached very easily from Kansai International Airport, just 70km away.

How to visit Kobe

Unless you are a big fan of Kobe beef and want to sample as many different dishes as possible, or you enjoy hiking and want to explore the many outdoor walks that Kobe has to offer, you probably won’t spend too much time here. It could be visited on a day-trip from Osaka (or Kyoto if you wake up early enough) or as a perfect stop-over en route to the island of Shikoku.