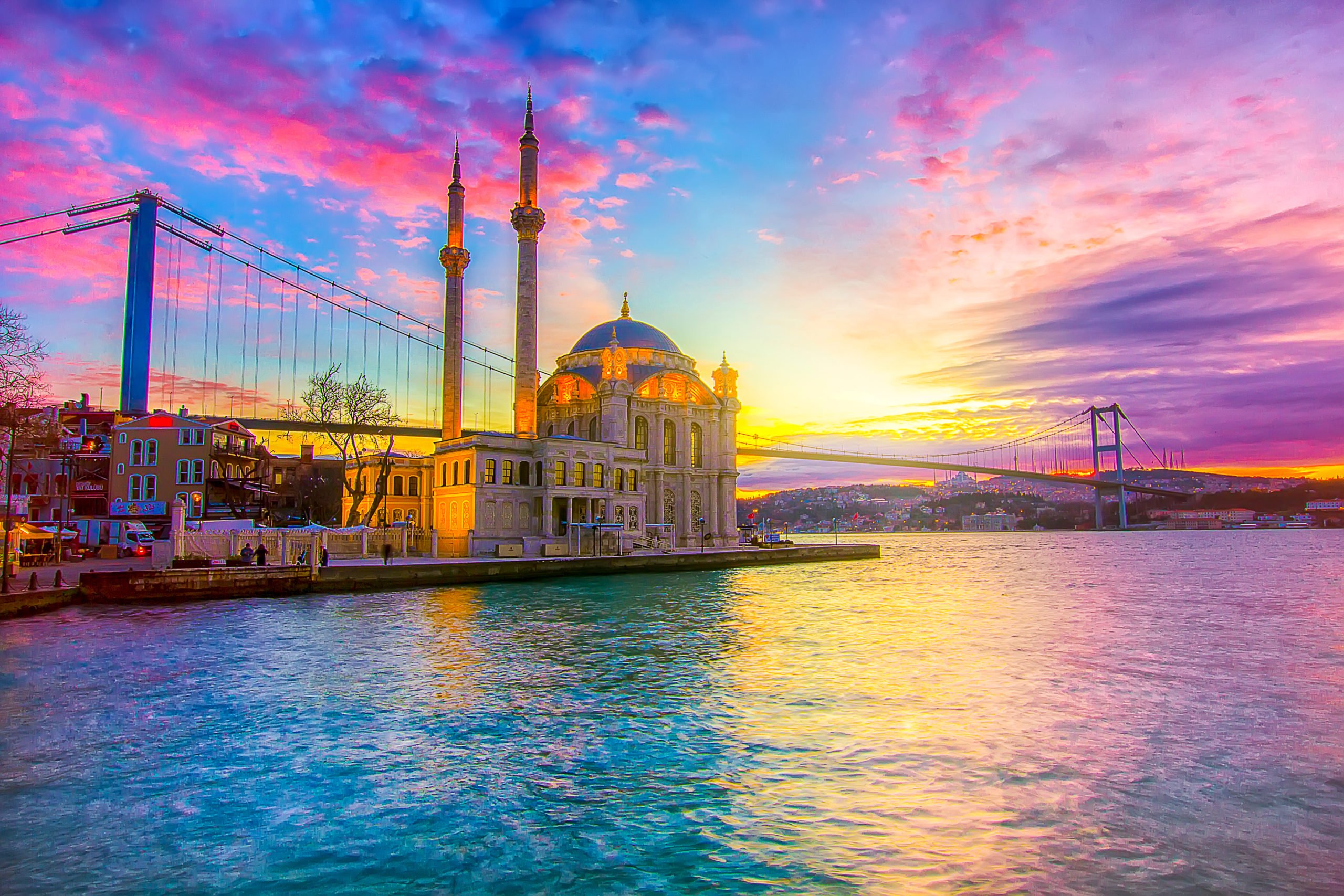 Situated on the old Silk Road, on the banks of the Bosporus and nestling between Europe and Asia, Istanbul is steeped in an incredible history that spans centuries. It is a fascinating city to visit as it arouses all the senses with its vibrant colors, its myriad of fragrances, cacophony of sound, and delicious cuisine. There are so many fascinating places to visit that a year may not be long enough to explore them all, but our Istanbul travel guide is here to help you.

The center of the old part of the city is Sultanahmet Square, which is overlooked by several key sights including Hagia Sophia and the ‘Blue Mosque’. Start early, before it gets hot and the city becomes busy and simply wander. The Grand Bazaar is just a ten minute walk from the square. If you feel in need of a refreshment along the way, there are street vendors selling chilled pomegranate juice and simit, bread circles smothered in sesame seeds – delicious! Read our Istanbul travel guide to navigate this gorgeous destination.

What better place to visit early on in your stay in Istanbul than the Galata Tower? The tower stands 60 metres above the city and offers a marvelous 360º panoramic view over the city. On a clear day, you can just make out the Princes’ Island in the distance. The tower has a restaurant on the ninth floor, or if you fancy some really authentic cuisine, the Galata district has some really good restaurants – many with roof terraces.

When it was built in 537 AD by the Byzantine emperor Justinian,  it was a huge architectural achievement as its main feature is a magnificent dome that is 43 meters in width and 65 meters high. It was certainly quite a feat, and there are records that show that the dome fell twice during construction before they managed to secure it. Hagia Sophia was originally a church, but was converted into a mosque by Mehmet the Conqueror in 1453, and then made into a museum in 1935 by Atatürk. It is amazingly beautiful with some marvelous frescoes and intricate mosaics, as well as many wonderful pieces of art upstairs in the galleries.

More commonly known as the ‘Blue Mosque’, this beautiful mosque is an iconic feature in Istanbul. It was built by Sultan Ahmet I in the early 17th century in an unusual and clever design incorporating expansive curves, numerous domes, six elegant minarets, and the largest courtyard in any Ottoman mosque. The interior of the mosque was adorned with thousands of blue Iznik tiles which have given the mosque its famous nickname of the ‘Blue Mosque’. The mosque houses the sultan’s tomb on its north side. It does get incredibly busy, and is closed to non-worshipers for 30 minutes for prayers five times per day.

If you wand to avoid all the crowds, it is worth finding your way to Süleymaniye Mosque. Istanbul sits on seven hills and the Suleymaniye Mosque dominates one of them. This Mosque was the fourth to be built in the city and was designed by the famous architect Mimar Sinan for Süleiman the Magnificent. Its construction began in 1550 and took seven years to complete. The mosque is truly beautiful with four minarets- each with a balcony, stained glass windows, and a magnificent floor carpet. As well as being a magnificent place of worship, many of its  buildings have been adapted and are now used as a school, hospital, and kitchens on the site.

The official residence of countless sultans, Topkapi Palace features elegant kiosks, pavilions and four attractive grassed courtyards. The treasury contains a stunning collection of jewelry and ornaments, whilst the Weapon’s Room highlights the superb craftsmanship used to make the swords and bows. An interesting room is the Harem – a decorated chamber where the sultan’s women were kept. There are stunning views to be enjoyed from the palace of the Sea of Marmara, the Bosporus, and Golden Horn.

This is the oldest and largest covered bazaar in the world as well as being one of the most visited places in all of Istanbul! With sixty pathways and  more than five thousand shops and stalls, the Grand Bazaar is a fascinating place. It is truly authentic, where most of the locals shop, and bargaining is definitely a good skill to have. The bazaar is famous for its leather goods, ceramics, carpets, and jewelry. The Spice Bazaar (also known as the Egyptian Bazaar), established in 1600, is also worth visiting. It has countless stalls selling spices, nuts, and delicious boxes of Turkish Delight. It’s also one of our favorite places in this Istanbul travel guide.

Standing on the European shoreline of the Bosporus is this huge and magnificent palace that housed the Ottoman administration in the final years of their Empire. The palace is six hundred metres in length and contains over two hundred rooms and forty-three salons. It was built in 1856 by Sultan Abdül Mecit in an effort to convince the world that the Ottoman Empire was as wealthy and influential as ever. Each room is decorated with crystal, marble, and gold leaf. The ceremonial chandelier in the main hall is simply stunning and weighs no less than four and a half tons, whilst the Baccarat crystal staircase is equally special. After the Republic of Turkey was formed,  Atatürk made the palace his home. He died there at 09:05 on November 10th, 1938, and in memory of this, all the clocks in the palace display this time.

The list of things to see and do in Istanbul is endless but if you have time, a river cruise along the Bosporus is especially fun.  Seeing some whirling Dervishes perform while in a prayer-induced trance is very special too – but this needs to be booked in advance. If you have the chance to pamper yourself, why not visit a hammam in the city? It is the perfect way to revitalise your body, the traditional Turkish way….