How to Spot a Geisha

The Geisha is an iconic image of authentic Japanese culture that originates from the entertainment districts of the Edo period. Easily recognizable by their beautiful kimono and exquisite make-up, the Geisha represents a significant cultural period in Japan that does not want to be forgotten. Although this pastime is not as popular as it once was, Geisha still live and work in Japan to this day, however, due to the exclusive, high end nature of Geisha entertainment, they can be very difficult to find.

Today, Geisha mainly operate in Gion, an ancient district of Kyoto where authentic Japanese customs continue to live on. Each day visitors to this city roam the narrow cobbled lanes of Gion in the hope of catching sight of them. Though this can be difficult, this guide will provide some useful tips on how to spot a geisha in Japan.

What is a Geisha?

Simply put, a Geisha is a traditional entertainer. They use ancient art forms to entertain guests and are taught to perfect a wide range of skills. The Geisha derived from the Edo period, a time of war and regal entertainment where small districts were entirely dedicated to entertaining the samurai. Interestingly, Geisha were originally male drummers and musicians. Female musicians grew in popularity and from this derived the geisha as we know it. 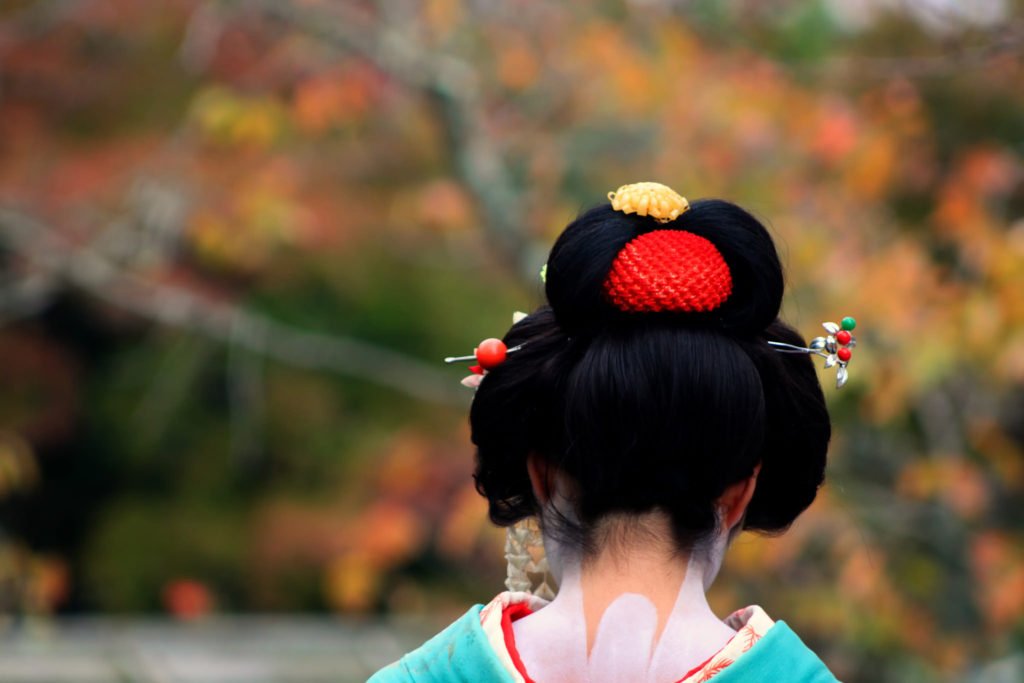 As entertainment under the shogunate became increasingly popular, Pleasure Districts were built. These districts were dedicated entirely to entertainment and were used to confine and conceal the darker arts in one place. Geisha sprang out of the districts as a way to combine beautiful women with classical entertainment including singing, poetry reading and dancing.  These were refined women who undertook a strict regime of training.

Often, the role of a Geisha is misconceived by the Western world and it is important to note that Geisha have never been involved in prostitution. Instead, Geisha are there to keep ancient art forms alive within an entertaining environment.

Today, geisha still follow a similar schedule and live in traditional Geisha houses (okiya) whilst they train. Whilst geisha can be found in Tokyo, Kyoto remains the home of the Geisha, mainly in the district of Gion. It is a dying art form and there are fewer than 2,000 geisha today compared to 80,000 in the early 20th Century.

When looking for geisha in Japan, it is important to be aware of the different categories. Shikomi and Minarai are at the very early stages of their training whilst Maiko are apprentice geisha. In Kyoto, there are many Maiko performances that visitors can buy tickets to see. Maiko can remain at this stage for a number of years and this is where they learn and develop their entertainment skills.

After their training as a Maiko, the women graduate to Geisha status. Traditionally, a female Geisha was known as a Geiko and this term continues to be used in Kyoto today. Maiko (Geisha in training) are identified by their bright, long sleeved kimonos and extravagant hair pieces whilst Geiko wear short sleeved kimonos and have a more subtle appearance. 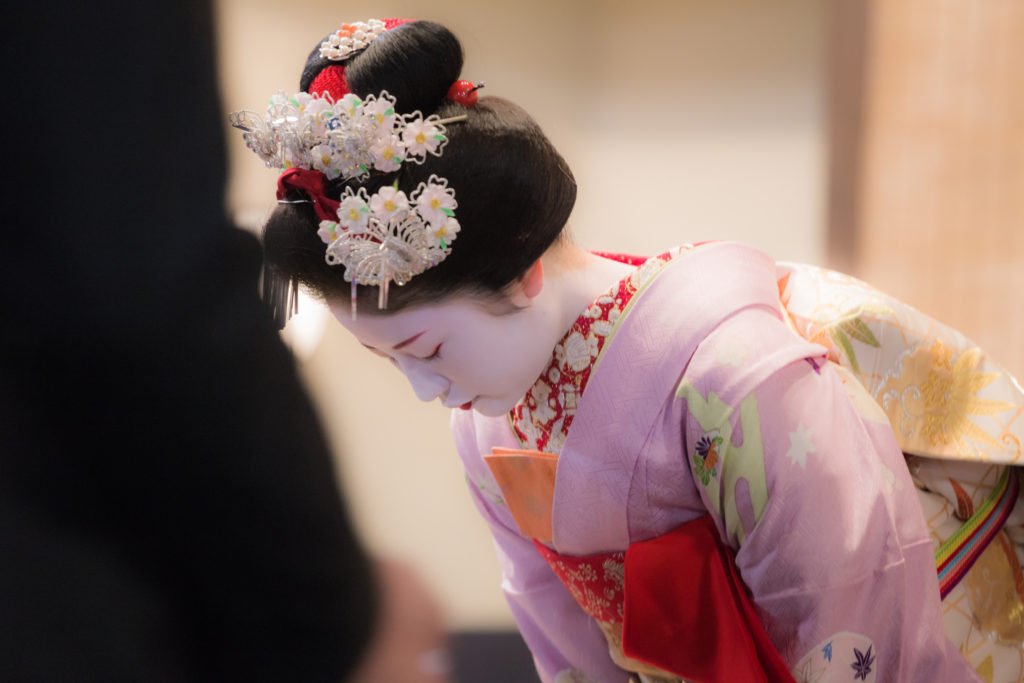 how to spot a real Geisha in Japan

With so many Japanese visitors dressing up in Geisha attire around tourist hotspots, it can be very difficult to tell who is a real Geisha. Real Geisha tend not to interact with tourists on the street and you will certainly not see a real Geisha posing for photographs.

Today, Geisha entertain at private dinners and events. If you would like to attend a Geisha dinner, many hotels in Kyoto can arrange dinner and entertainment packages. Though these events are very expensive, they are by far the best way to get close to a Geisha. The dinners are highly entertaining for all the family and provided a truly memorable experience.

Annual Geiko and Maiko performances occur in Kyoto five times a year. The best time to see these productions is during April when they perform on a daily basis. These beautiful productions showcase dance and musical skills and are a fraction of the price of private dinner packages.

If, however, you are travelling on a small budget, the next best way to spot a Geisha is by wandering around the historic district of Gion in Kyoto. Kyoto is famed for the high level of training that the Geiko receive. In Gion, the best time to see Geiko (geisha) is during the early evening on a weekend when they are on their way to an event. Hanami-koji-dori is a popular area to find Geisha, particularly on weekends.

Spot a geisha in the street?

When a Geisha is outside, she is almost always on her way to work so please treat Geiko and Maiko with respect and let them pass. Geisha do not enjoy being photographed and will rarely ever stop. Though it is exciting to spot a Geisha in Japan, do not bombard them with photo requests. 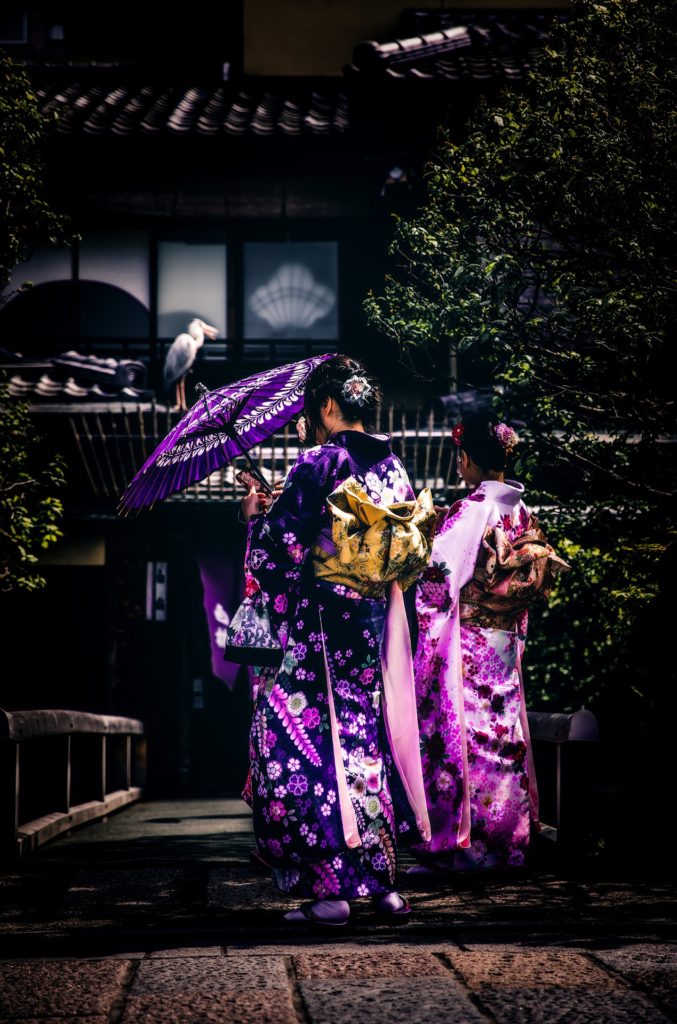