Sandwiched between the twin powerhouses of Shinjuku and Shibuya lies Yoyogi Park, and the area that surrounds it, known as Harajuku. There is less to explore here than in the nearby mini-cities but it is a much more manageable spot, with some superb attractions to rival anywhere else in the city.

For such a modern and fashionable district of Tokyo, Harajuku owes a lot of its prominence to Yoyogi Park nearby and to the traditional Meiji-Jingu Shrine next to the station. Following the death of Emperor Meiji in 1912, a commemorative shrine was built on the site of a favorite garden of his.

While Yoyogi park has long been the favored green space of many Tokyoites, the region really grew in size and importance following the construction on-site of the Washington Heights housing complex, built to home thousands of occupying American troops. Following their departure, the buildings were used as accommodation for the world’s best athletes for the 1964 Olympic Games, and the striking National Gymnasium was also built at this time.

This influx of multi-culturalism gave birth to the internationalist feel of Harajuku and meant a lot of local people (particularly teenagers) came to the area to see the fashion of the rest of the world. Since then, the word ‘Harajuku’ has expanded to not only signify several busy streets in western Tokyo, but also embody its own special style, intrinsically linked to the ‘Kawaii’ culture of Japan.

Harajuku is a pleasant walk away from both Shibuya and Shinjuku and is also located on the crucial Yamanote line so is easily reached from anywhere in the city. The best entry point is the European-style station of Harajuku, or the Meiji-Jingu Mae subway stop just over the road. The pedestrianized Takeshita-dori is the focal point of Harajuku, both the area and the culture, and is impossible to miss. 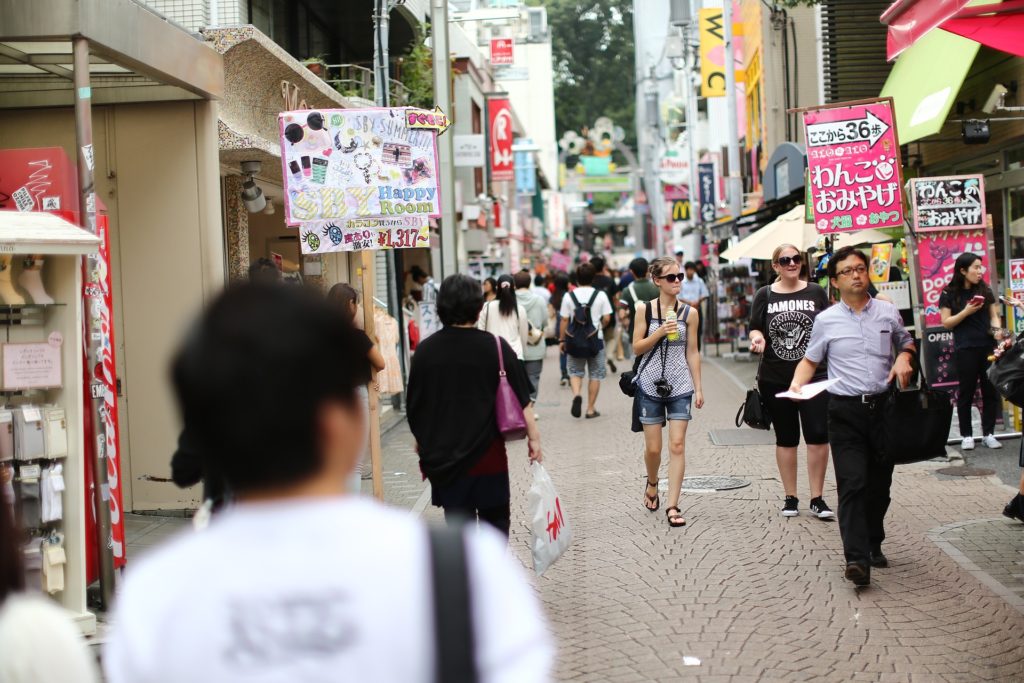 What to do Harajuku

The contrast between the quiet sheltered paths of Meiji-Jingu on one side of the station and the bustling side-streets of Harajuku on the other is one that is too good to miss. The shrine is a great place to escape the crowds, but visitors will be stunned by the towering Torii gates and the overall serene atmosphere of the area. Those lucky enough to arrive during a traditional wedding ceremony will never forget it.

Takeshita-dori has plenty to keep even the most cynical-shopper occupied and is often home to brands that are uniquely Japanese or ones that have received a ‘Kawaii’ twist. Omotesandō boulevard runs parallel to this but is much wider and where a lot of international outfitters are located. Both are worth a stroll along but don’t forget about paying a visit to Yoyogi Park before you leave. The biggest park in central Tokyo, it has a fantastic atmosphere on weekends and warm evenings when thousands of people buy a well-deserved bentō and a beer from 7-11 and sit in the park.

How to visit Harajuku

Afternoons, especially on weekends, will see the main Takeshita-dori street heaving with people so keep that in mind when visiting. The evenings, however, are much quieter here as there is a much lower concentration of restaurants and bars. A lot of people will have moved on to some of the trendy neighborhoods in ‘Ura-Harajuku’ (the surrounding streets) by late afternoon.

Keep in mind that while Yoyogi Park is open 24 hours (but best visited on a Sunday), Meiji-Jingu is only open during daylight hours. Sports fans should time their visit here to coincide with either a Yakult Swallows baseball game, or a Sunwolves rugby match. Both the Jingu Stadium and the Chichibunomiya Rugby Stadium are close by in the area of Gaien-mae.
For many people, Harajuku is the primary reason for visiting Tokyo; to see the wackiest fashion trends and buy some memorable souvenirs. For precisely the same reason, a lot of people will stay on the train and decide to skip it. However, Harajuku has much to discover for all types of visitor, with as much history as modernity and as much nature as high-street fashion.