How to Get from Kyoto to Osaka Airport

Kyoto is one of Japan’s most famous cities and the second most popular destination after the capital for incoming visitors. Its ancient charm has enchanted both domestic and foreign guests for centuries but in keeping with this old-world atmosphere, Kyoto doesn’t actually have an airport within the city limits.

The closest airports are both centred around Kyoto’s conjoined-city of Osaka, with Kansai International Airport located south along the edge of Osaka Bay and Osaka Itami Airport being slightly west of the city centre.

Bus from Kyoto to Osaka Airport

The ‘Osaka Airport Limousine’ company provides buses to both Osaka airports, and at plenty of different times throughout the day. There are occasionally alternative pick-up points but the most commonly used is Kyoto station itself, and buses from there direct to the airport take 50 minutes and cost ¥1,310.

The earliest of these services leaves at 05:40 and the latest at 18:50 so any late-night flyers will need to find alternative arrangements. It is also worth keeping in mind that there can be a lot of traffic during rush hours in both the morning and the evening. Travelling through one of Japan’s most congested metropolitan areas always entails the possibility of a hold-up. For anyone interested, buses to Kansai International Airport take 90 minutes and cost ¥2,550.

Train from Kyoto to Osaka Airport

One of Japan’s best connected city areas it may be, the Keihanshin Metropolitan Area’s train network is lacking in one very important journey; a direct service from Kyoto to its closest airport, Itami. Therefore, trying to reach Itami from Kyoto city will involve one change (at the absolute minimum) and often two, or three.

The fastest rail connection involves taking the JR Kyoto Line Special Rapid to Osaka station and transferring onto the Hankyu-Takarazuka Line Express at Hankyu-Umeda station, which is a 10 minute walk but is a very straightforward change. You take this line north to Hotarugaike where you must transfer a final time onto the Osaka Monorail and go one station to the west, Itami Airport. In total, this will take approximately 1 hour and 10 minutes and cost ¥980, providing you successfully navigate all the transfers.

Of course, you might not necessarily be staying near Kyoto station and the heavily built up area that surrounds it. The likelihood is that you’ll be staying further to the north, closer to the older parts of the city and where the bulk of the hostels and hotels are located. 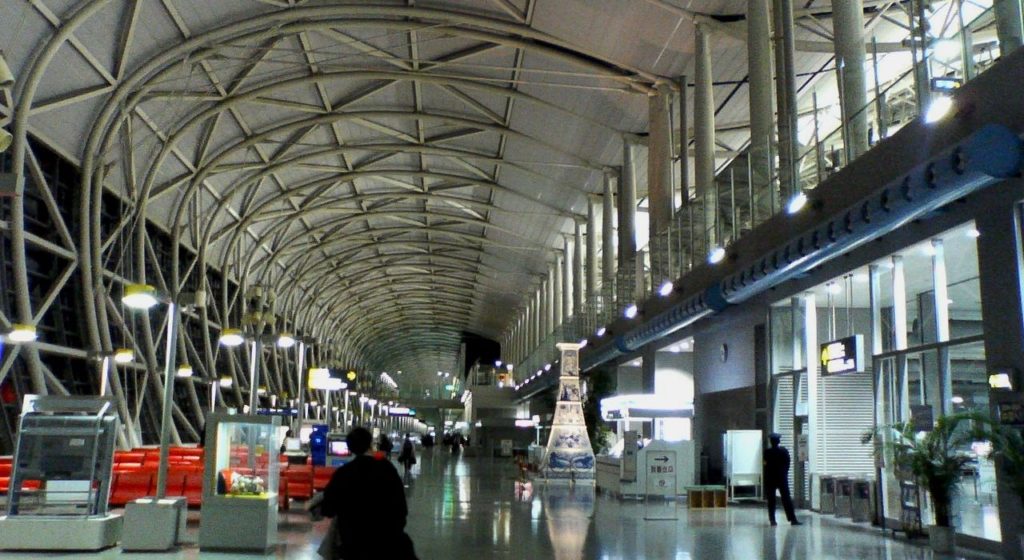 In that case, leaving from Kawaramachi station is a much easier journey, and cheaper too. Hop on the Hankyu-Kyoto Line Rapid-Express and at Juso (in northern Osaka), transfer onto the Hankyu-Takarazuka Line and then finally, the Osaka Monorail. This will take an almost identical amount of time as departing from Kyoto station, but will only set you back ¥670.

Finally, the easiest journey of all from Kyoto also departs from Kawaramachi station and requires just one line transfer, at Minami-Ibaraki. After the Hankyu-Kyoto Line Rapid-Express, you can get straight on the Monorail at Minami-Ibaraki and ride directly to the airport in around 25 minutes. At just ¥750 and lasting a mere 1 hour and 7 minutes, this is probably the most efficient and hassle-free way of reaching Itami.

Driving from Kyoto to Osaka Airport

Renting a car for the day and driving yourself there will cost around ¥7,500 from a budget dealership such as ‘tocoo’ but as mentioned previously, these are very busy roads and not for the faint-hearted driver.

Best way TO GET from Kyoto to Osaka Airport

While lacking an easy route from Japan’s cultural jewel to its closest airport, the frequent OKKBUS services mean that you don’t need to worry about booking a flight from Osaka and staying in Kyoto.

Hopping on a bus is undoubtedly the easiest way of completing this journey and doesn’t cost a huge amount more than the train. Those staying near Kawaramachi could take the train, however, providing they’re comfortable with the Japanese rail system.