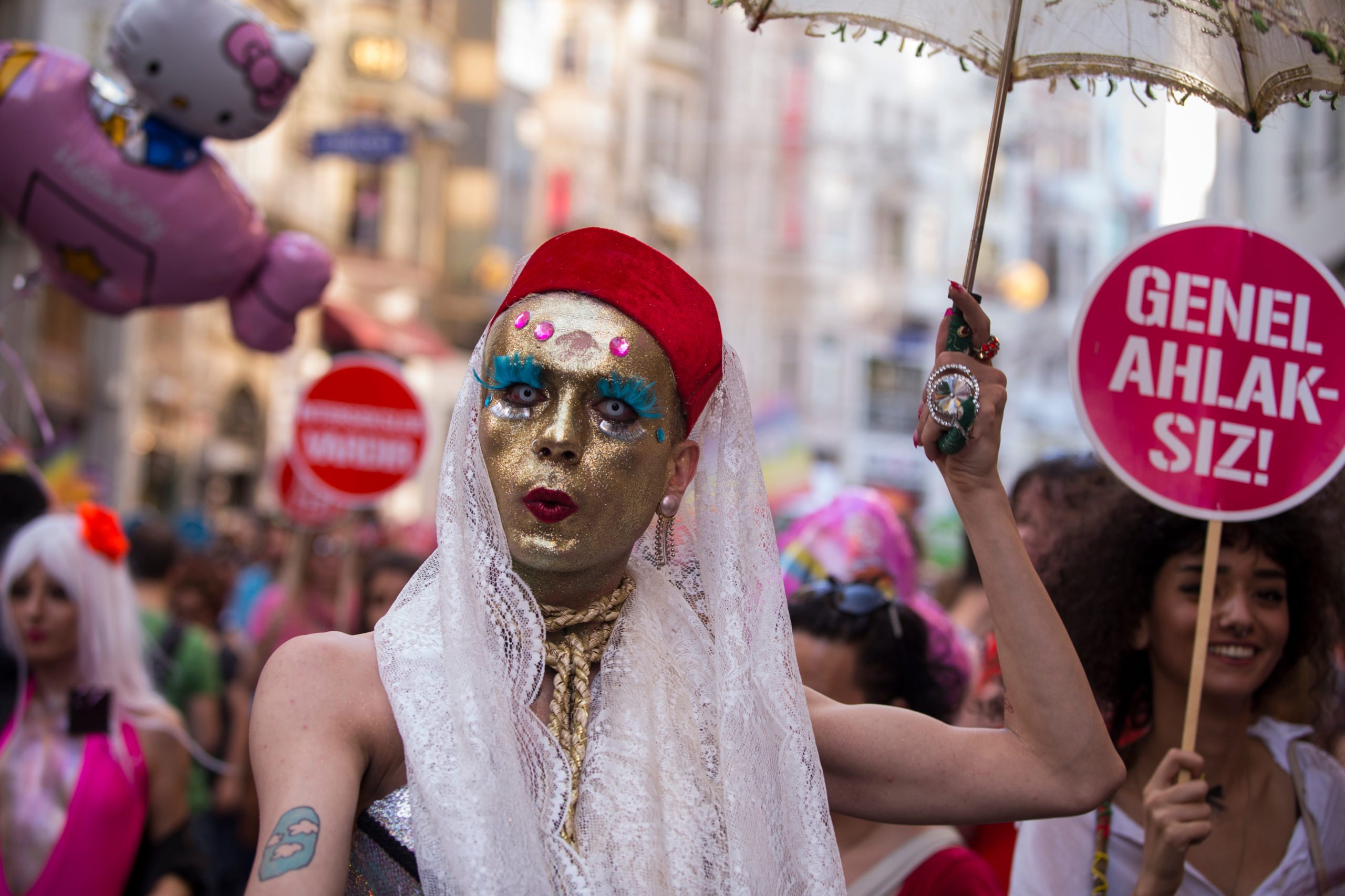 Istanbul is the busiest city in Turkey, and as such is the center of gay life, which is why we created this gay Istanbul travel guide. The gay community has grown since the late 1980’s and has become more visible. There is a liberal and open sex scene, but taboos and discrimination still exist in many parts of the city, and throughout Turkey. Displaying affection in public is best avoided – a discreet approach is advised to avoid conflict with locals in most of the city.

The district of Beyoglu on the European side of the city is the main gay district and the heart of the most lively art scene. The Taksim quarter of Beyoglu is where almost all major gay venues are found, and a vibrant part of the city to explore. Taksim is known for its night life in general and has the best gay bars and nightclubs, including clubs that cater to the growing trans community within Istanbul. If you’re looking to sweat it out while traveling, Taksim is also where most of the gay-friendly gyms operate during the day. It’s also a busy district, and one of the stops on this Istanbul design guide.

Istanbul has always hosted a huge annual Pride demonstration each June/July and had been doing so for more than 15 years, becoming one of the largest LGBT events in Eastern Europe. Lambdaistanbul is the first LGBTI+ organization in Istanbul, and was founded in 1993.

With more than ten million visitors each year, Istanbul is one of the most popular cities to visit in the world and a number of its hotels are gay-friendly, opening foreign couples and visitors with open arms.

The Park Hyatt offers guests a luxury experience in one of the most fashionable shopping districts, close to all of the main attractions, and the on-site restaurant provides delicious meals from morning til night. The Witt Istanbul is an aparthotel offering a traditional homemade Turkish breakfast, chic rooms to unwind in, and a cozy lobby bar with tasty cocktails to meet other guests and mingle.

Tomtom Suites is a consistent favorite with guests, and is registered with the global small luxury hotels guild. Some of our favorite amenities include private spa baths(shown above), panoramic rooftop views of some of the city’s most famous locales, and a terrace restaurant offering a blend of Turkish and Mediterranean cuisines with complementary wine pairings. While the city has a number of fantastic hotels, these included in our gay Istanbul travel guide are our favorite in the city.

Many of the bars for gay Istanbul are cafes by day and bars by night. Chaplin’s Bar is a popular place in Taksim for pre-party drinks to get your night going. with cheaper drinks and a younger crowd congregating here. Haspa Bar has a good DJ and often hosts live music – with some karaoke thrown in for fun! It’s the perfect way to get in the mood for a night of dancing and partying, no matter where you end up. Take a breath and relax at the Chianti Bar. The bar opens at 3:00 p.m. and stays open until early morning. It is a great meeting place, and one of the longest running combination cafe and bar venues that caters to the gay community. If you don’t have enough choices here, take a look at our guide to nightlife in Istanbul.

While everyone loves to club, the list for our gay Istanbul travel guide only includes exclusively gay or gay friendly bars and clubs. Tex Yan is the largest gay club and is situated in Taksim. Tex Yan is open every night and gets pretty busy – especially on Saturday nights, so be sure to get there early! There is an open air garden for smoking, and drag performances are organised for Sunday evenings. SuperFabric is a more upmarket club, and often has live performances. They sometimes charge covers on the weekend, and the entrance is on a hidden side street, so do your research before heading out. Love Dance Point has been popular for more than ten years because it has great music and fantastic theme nights, but drinks can get pricey. Make sure to start with a pregame to avoid blowing your whole travel budget in one night. If you head to any of the drag bars, be aware that if hostesses seat you and then sit down at your table, you’re expected to pay for their drinks. Just let them know you won’t do this and they’ll leave you be.

Historically, hammams were only for men and it is only relatively recently that there have been separate bathrooms and saunas available for women with table service and male belly dancers – it is often so popular there is no room for dancing. Because of their traditional place in society, gay hammams in Istanbul are incredibly popular. Firuzaga Hamami in Beyoglu is a small, old hamami – but it is extremely popular with men of all ages. There are massages available and private cabins are available – at an extra charge. The Aquarius Sauna is situated in Istiklal Avenue in Taksim and is open 24 hours. It has a dry sauna and a jacuzzi that can accommodate up to 10 individuals. Massages are available in private cabins and there is a popular cafe bar where coffees, soft drinks, and light snacks can be purchased to keep your energy up. Sifa Hamami is another popular venue in Beyoglu and has bathing facilities as well as spa and massage facilities.

Taksim Flash Gym is situated on the 4th floor of the Aznavur Passage Shopping Mall in Istiklal Avenue and covers an area of 500m². The gym is extremely well equipped with a full range of cardiovascular equipment plus the free use of weights, making sure that you’ll get a good session in before you go to explore the city. The Marmara Gym is part of the Marmara Taksim Hotel, but membership is available to non-residents and visitors. The gym has state of the art equipment plus a large outdoor swimming pool, and also offers members the chance to hire a personal trainer, join a pilates class, or hop on one of their many cross-training machines solo. They’re a huge part of the gay scene in Istanbul, and the reason they made it into our gay Istanbul travel guide.