Resting along the northern shore of Kyushu Island, Fukuoka is the capital of Fukuoka Prefecture and the largest city on the island. With a rich history dating back to medieval Japan, the once former residence of daimyo of Chikuzen Province, Fukuoka, now a modern city showcases both the past and the future. From ancient temples to shopping malls, the city is versatile and charismatic. The extensive city infrastructure has the Fukuoka International Airport and a subway system connecting main attractions and sites between Hakata, Meinohama, and Tenjin.

Some of the ancient sites include the ruins of 17th century Fukuoka Castle which can be found inside Maizuru Park. There is also the central Hakata district where you will find the main train station. Hakata, one of the oldest cities in Japan and holds the Tochoji Temple where you will find a large wooden Buddha standing 32.8 feet high. Other highlights include the Hakata Machiya Folk Museum with artifacts dating back to the Taisho and Meiji period.

What to do in Fukuoka

Standing some 234 meters high, the Fukuoka Tower is situated in the Momochihama area of the city. It is the tallest tower on the seaside in Japan. The tower has a unique structure that is covered in 8000 half-mirrors which create an illusion of a skyscraper and is nicknamed that “Mirror Sail” given its unusual shape and reflective siding. The tower is an impressive architectural structure and is famously known for appearing in the 1994 “Godzilla vs SpaceGodzilla” film in which the tower is annihilated. The tower is enjoyable to visit both during the day, or at night when it is lit up.

The oldest Shingon temple in Kyushu founded in 806 by Kukai. Here you will also find a temple cemetery known as the Tadayuki where the past feudal lords of Fukuoka have been buried. You will see the biggest Buddha wooden statue along with with the thousand-armed Kannon statue. Next to the temple, there is also a 5-story Pagoda structure. To access the temple, you will need to walk through a pathway which at times can be very dark, but don’t worry it is worth it at the end once you arrive at the temple.

The perfect place to enjoy a quiet stroll or a contemplative moment in the park. Found quite close to the Fukuoka Castle, Ohori Park is a beautiful Japanese garden overlooking the waterfront, where you will also find boats. In the middle of the city, an outdoor space which invites peace and quiet amid the natural surroundings, a welcome break from the hustle and bustle of the city pace.

Nanzoin Temple and the Reclining Buddha

One of the most peaceful and quiet yet impressive attractions is found at the Nanzoin Temple here you will see a very large scale Buddha. The reclining Buddha structure is intended to bring serenity and calmness. This site itself is free to visit, but if you want to see the Buddha inside you have to pay about 1000 yen. It is a very calming activity and definitely worth the visit if you are in Fukuoka. 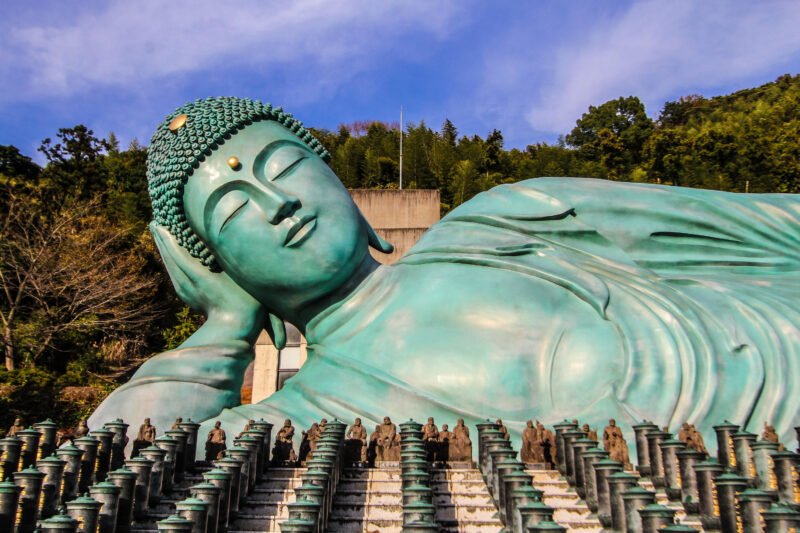 A peaceful and tranquil shrine with a small koi pond which is easily accessed from the nearby Watanabedori Subway station, and just a quick 5-minute walk to access the shrine. On weekends you will find a market selling small handmade goods, vintage items, and different Japanese food. This is a certainly a special place to come for quiet when you are near the shrine and a way to connect to the old traditions of the area.

If you happen to visit Fukuoka in July, you can see the streets filled with floats celebrating the five day festival of Hakata Gion Yamakasa. This event brings some 1 million visitors who come to participate in the festivities which hosts teams for 7 districts of Fukuoka city to compete. The festival is from July 1 to July 15 and is centered around the Kushida Shrine.

How to get to Fukuoka

There are many ways to get to Fukuoka, but perhaps the easiest and most popular choice to take a Shinkansen. It is possible to travel directly to Fukuoka from Tokyo along the Tokaido/Sanyo Shinkansen. Another popular option is to travel to Fukuoka via air transportation since Fukuoka has its own airport. Many low-cost airlines fly daily between Tokyo and Fukuoka. From Fukuoka Airport there is a very easy and accessible subway which only takes about five minutes to access the city center.