The Japanese Alps are often overshadowed by Mount Fuji, which is one of Japan’s biggest draw for tourists. However, Mount Fuji can only be climbed during two months of the year and is done so by thousands of people every day that it is open. For the truly intrepid, the Japanese Alps remain the most exciting prospect, offering more challenging hikes, cheaper prices and often better scenery than Fuji itself.

They are also the perfect place to escape the 21st Century obsession of Honshu (the main island of Japan), with skiing, onsens and unmissable natural landscapes everywhere you look. 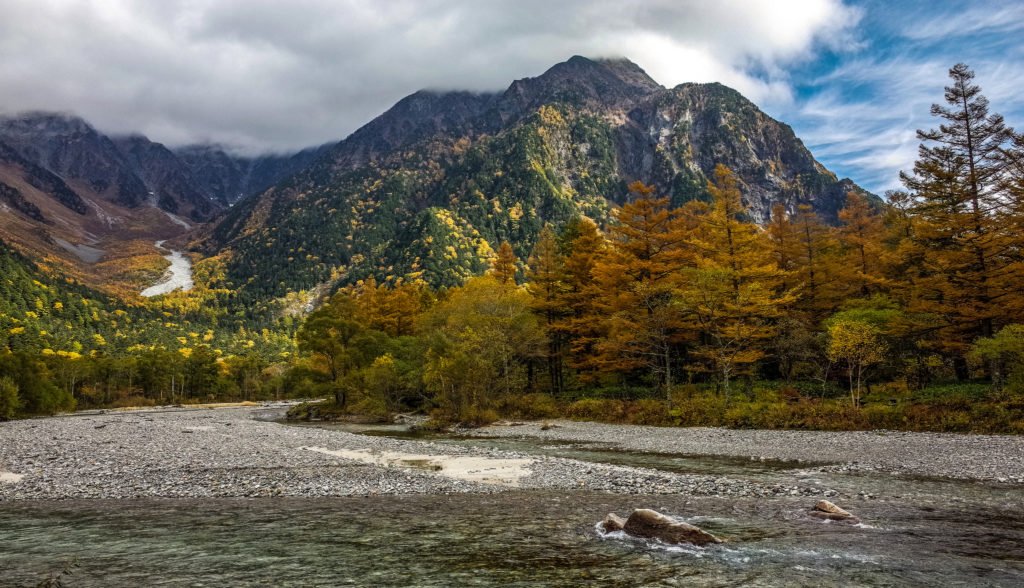 What and where are the Japanese Alps?

The name of the ‘Japanese Alps’ is a little misleading, as it refers to three separate mountain ranges in the centre of the island of Honshu, and a little inaccurate. The term was first used by Englishman William Gowland to describe the northernmost Hida mountains and later misinterpreted by his fellow countryman, Walter Weston, as incorporating the Kiso and Akaishi mountains as well.

Looking at a map of Japan, you’ll see a startling lack of towns and cities within the triangle that’s formed between Tokyo, Nagoya and Kanazawa. This is because it is almost entirely composed of mountains, stretching from Toyama Bay in the north to Hamamatsu and the Pacific Ocean in the south.

The Hida Mountains/ Northern Japanese Alps is composed mostly of the Chubu Sangaku National Park, and is arguably the most popular area of all because it has some of the highest peaks in the country. The Southern Alps/ Akaishi Mountains are almost as big and border Mt Fuji. Sandwiched in-between are the Kiso Mountains or the Central Alps as they’re known. Though not as large, they are nevertheless home to some of the country’s busiest ski resorts.

What to do in the Japanese Alps?

The two most obvious activities within the Japanese Alps are quite self-evident – hiking and skiing – but because of the sheer size of these mountain ranges, there are countless different experiences and adventures to have. Chubu Sangaku National Park, and particularly the area between the towns of Takayama and Matsumoto, is probably the most popular region of all, and one of the most accessible.

Within the National Park, Kamikochi is almost a perfect microcosm of the Japanese Alps, and is regarded as the gateway to Japan’s largest mountain ranges. At 1500m, Kamikochi is high enough to offer a perfect vantage point of the picture-perfect scenery that surrounds it.

The area has several hotels, restaurants and campsites that provide a great base for hiking through the forests, catching a glimpse of some wild macaques or climbing mountains, such as the spectacular (and smoldering) Yakedake. Other highlights within the Hida mountains include the crazy Alpine route that encompasses all manner of transportation, the Kurobe Gorge and Hakuba ski resort.

The Kiso Mountains contain the Komagatake Ropeway which provides unbeatable access to Mt Kisokoma, the highest in the region. Finally, the Akaishi Mountains which are the most southerly, are home to ten of Japan’s ‘100 Most Famous’ mountains as well as the elusive Japanese serow.

How to visit the Japanese Alps

The Kiso and Akaishi ranges are best visited by choosing one particular mountain or ski resort and going there, whereas the Hida area can be seen in a much more effective manner. Its close proximity to some large cities, particularly Matsumoto, and its better developed tourist infrastructure, make it an easier option for those wanting to sample the Japanese Alps.

The area does require a slightly higher budget than elsewhere in the country, unless you’re willing to camp. Regardless, Kamikochi should not be missed on any Alpine-itinerary and it alone deserves two days of your time.