The Best Travel Experiences in Egypt

Egypt is filled to the brim with extraordinary, unique experiences that cater to every type of traveler. Whether you just want to cross off the bucket-list sites, are looking to explore Bedouin culture, or love the great outdoors, here are the best travel experiences in Egypt you shouldn’t miss when on your next trip.

Take a Trip to Siwa Oasis

Siwa Oasis sits just 50 km from the border of Libya. While in the depths of the desert, it is renowned for its off-the-beaten-track beauty and its stunning silence. Located an eight-hour drive from Cairo, offers a humbling escape from the hustle and bustle of modern life. The area is home to the Siwan Berbers, originating from North African Berber Bedouin tribes known as Amazigh. The Siwan people are famously good-natured, warm, and passionate about preserving their culture. Get ready for a rich authentic experience like no other. So it’s no surprise that legend has it that a trip to Siwa will change you forever.

See the Pyramids on Horseback with a Local Guide

The pyramids are at the top of everyone’s bucket list, but exploring the plateau on horseback is really something else. Horses have been a large part of Egyptian life since around 1700 BC, and were traditionally used for chariots. Additionally, they were viewed as an expression of power and romance. Visiting on horseback means uninterrupted peace. With a clear view of the pyramids and tourists miles from sight, there’s no better way to soak up Egypt.

What began in Turkey as part of the Mevlevi order of Sufism has evolved into an elaborate, colorful artistic performance in Egypt known as Tanoura. Sufism is known as the mystical branch of Islam, with close to six million subscribing to the belief in Egypt. Some dancers dress traditionally in plain white robes, while others wear multiple brightly colored skirts, creating illusions and enchanting visual effects.

Egypt’s only Sufi dance troupe puts on a performance three times a week. It takes place in the courtyard of the gorgeous Wikala of Al Ghouri. Built in 1504 AD, the wikala was designed as an inn for traders along the caravan routes. The charming Islamic architecture creates a mystical ambiance just perfect for soaking up the magic.

Take a Dive in the Blue Hole

The Blue Hole is a world-class diving spot famous for its irresistible beauty and wildness. Located just north of Dahab, the geological wonder of the Blue Hole is marked by a chasm that opens up several hundred feet into the hidden waters of the Red Sea. Additionally, it’s magnet for divers from all over the world. Undoubtedly, the spot is renowned for its vibrant coral and marine life as well as its unique topography. While diving, keep your eyes peeled for a sunken British freighter, underwater caves, and eco-sculptures.

Not into diving? There’s still a way for you to have this travel experience in Egypt. Pop on a snorkeling mask and watch the underwater world from above.

While most people opt to climb Mt Sinai for sunrise, you may want to follow in Moses’ footsteps and stay the night, too. Referred to as the site where Moses received The Ten Commandments, the hike to the top of the mountain takes around four hours. For an authentic, peaceful experience, you’ll want to skip the crowds and head up in the afternoon. The best part of going against the grain is you won’t have to share mountain views and you’ll be able to stick around for both sunset and sunrise.

Sleeping over also means meeting the resident Sinai Bedouins. Offering mattresses, blankets and hot drinks to tourists who choose to stay overnight, the Bedouins living atop Mt Sinai are welcoming, resilient, and passionate about sharing their culture. Instead of rushing back down the mountain after summiting, take a seat by a raging fire and get to know the Sinai locals.

Cruise up the Nile

The Nile River was the main highway in Egypt in ancient times; boats transported grains, cattle, and building materials. So if dozing in the sun and watching the world go by sounds like your kind of thing, do as the ancient Egyptians did and take a cruise down the Nile.

The most common cruise sets sail in Luxor before heading to Aswan and returning over a three-night period, but companies offer a plethora of options for you to mix and match to suit your itinerary. Generally, your cruise will dock at the must-see ancient sites along the Nile, giving you ample time to explore. From budget options to authentic felucca experiences and luxury riverboat rides, cruising the Nile is one of the best ways to soak up Egyptian culture.

Go Sandboarding with Bedouins in Sinai

Legend has it that sandboarding hails from ancient Egyptian times when Pharaohs slid down dunes on planks of wood. So why not give it a shot? There are many full or half-day sandboarding tours from Dahab and Sharm el-Sheikh. To make the most of it, befriend a local Bedouin and hire him to guide your adventure. Hiring a local to be your guide will allow you to experience the authentic beauty of the rumbling hills around you while also supporting the Bedouins in preserving their culture.

Believed to be one of the earliest cradles of civilization, the Nubians are an ethnic group indigenous to modern-day northern Sudan and southern Egypt. Their rich history remains around modern-day Aswan, and their bold architecture stands strong. There’s a plethora of authentic experiences to take part in if you want to uncover Nubian culture. This makes it one of the most unique things to do in Upper Egypt. From visiting the Nubian Museum to sailing across the Nile to checking out Gharb Soheil Village, you’ll be humbled by their welcoming smiles.

Explore the Temple of Hathor at Dendera

Unlike most temples in Egypt, Dendera lays mostly silent among the yellow dunes in Qena. From Luxor, the journey is 62 kilometers north, making it one of the most tempting day trips in Upper Egypt. It glows with the signs of the zodiac and intricate depictions of Egyptian gods. Additionally, it’s one of the best-preserved temples in Egypt, standing strong for over 2,000 years. Stand beneath the grandiose pylons in awe of one of the country’s best-kept ancient secrets. If you want to discover something most visitors to the country don’t even know exists, this is definitely one of the best travel experiences in Egypt. 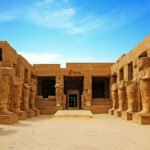 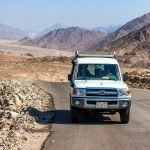 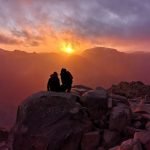