Unlike its competitors for the title of the world’s most famous city such as Paris and London, Tokyo is not particularly well-known for its museums. Make no mistake, unlike its globe-conquering rivals, Japanese museums focus almost exclusively on their own historically isolated country.

However, Tokyo has dozens of superb museums that deserve your attention and each is wonderfully different. Keep in mind that a lot are closed on Mondays and though very few are free, most cost nothing on International Museum Day (May 18) and Respect for the Aged Day (typically the third Monday in September). Those are the best museums in Tokyo:

While most museum buildings fit incongruously into their surroundings, or at least resemble other buildings, the same can certainly not be said for the Edo-Tokyo Museum. As soon as you disembark at Ryogoku Station in west Tokyo, you can see its spaceship-like design protruding out from the landscape.

Next to the ancient Ryogoku Kokugikan Sumo Stadium, the futuristic appearance of the building is actually in stark contrast to what lies inside. Built in 1993, the Edo-Tokyo Museum, as the name suggests, is a museum dedicated to the history of the city that was once known as Edo, and now Tokyo.

It showcases all the major events of the formation of Edo and displays how the small fishing village was slowly transformed into the world’s largest city today. While containing so much history, it’s also presented in a very forward looking manner, with lots of eye-catching models and displays. The life-size recreation of the Nihonbashi Bridge is the standout work, though. 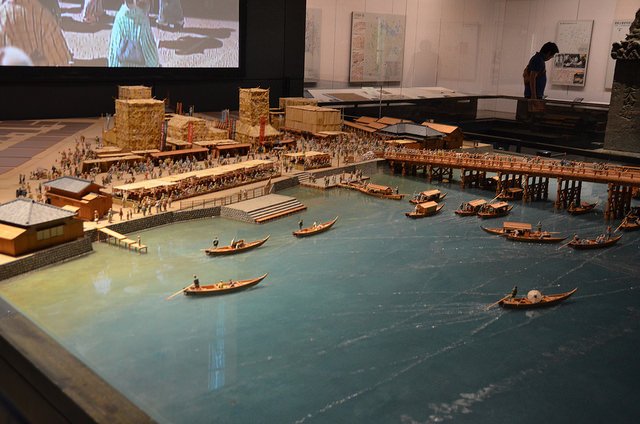 If you are a true history buff or are fascinated with ancient Japanese history then devote an entire day to wandering slowly through the corridors of this magnificent area. For anyone who just wants a quick peek then visit the main building (the Honkan) to see some of the permanent display’s most eye-catching pieces before heading back out to the equally magnificent Ueno Park. Admission is 640 Yen (ca. 6,40 USD).

Perhaps only in Japan will you find that the hottest ticket in town is for a museum. The level of devotion to the anime films of Studio Ghibli and its creator, Hayao Miyazaki, extends so far as to make a ticket to the Ghibli Museum gold dust. Tickets go on sale on the first of the month for the following two months so if you’re determined to go then make sure you’re on the ball as the tickets are almost always snapped up before the 2nd day of the month.

It’s still possible to visit if you miss out on these tickets by buying them from a scalper but this will often cost a lot more than the 1,000 Yen (ca. 10 USD) asking price on the official website. Those who do manage to procure tickets will be asked to step inside the mind of one of the world’s greatest animators and storytellers.

There is a life-size version of the Cat Bus from ‘My Neighbour Totoro’, a statue of the imposing Robot Soldier from ‘Castle in the Sky’ and much more. For many the highlight is the chance to see a selection of short films that cannot be seen anywhere else, making the Ghibli Museum a truly unique experience.

Staking a name for itself a new home for contemporary art and not as the go-to nightclubbing spot, Roppongi has gathered together three fairly modern art museums to form a great collection of work. Discount passes are available for the Mori Art Museum, the National Art Center and the Suntory Museum of Art which allow access to three of Tokyo’s best art galleries.

All are located within a short walk of each other within Roppongi but if you only have time for one then perhaps the Mori Art Museum is the best option, coming with the option of a walk on their impressive Sky Deck as well. Be sure to check each of their respective websites before visiting as the special exhibitions can vary greatly.

Besides the few mentioned here, there are plenty more dotted throughout the Tokyo metropolis, often sandwiched between a bar and a convenience store down an alley, but they are still there. Besides the wealth of information on offer, museums in Tokyo are a great opportunity to escape from the heat/cold/crowds, so should be considering when planning any itinerary.