One of the most popular ways of reaching the delights of Barcelona is by air. Thankfully, the second-largest city in Spain and gateway to Catalonia’s unique cultural traditions has an airport worthy of the task. This Barcelona Airport Guide will cover all you need to know, from airport facilities to how to get to and from the airport.

Where is Barcelona Airport Located?

The official name of Barcelona’s airport is Josep Tarradellas Barcelona El-Prat Airport. It takes its name from a former president of the Catalonia Generalitat and the area of the city where it is located. It lies approximately 12 kilometers southwest of the heart of the city, where you’ll find many of the best hotels in Barcelona. In addition to this Barcelona Airport Guide, we also have a guide to where to stay in the city which has some great options for all budgets. Style fans should also check out our choice of the most beautifully designed hotels in Barcelona.

Barcelona airport is a hub for airlines Vueling and Level. It also sees arrivals and departures from most of Europe’s major airlines, including budget carriers Ryanair, EasyJet, and Norwegian. It is also rapidly becoming a transit airport for flights to North and South America.

Around two-thirds of flights operate from Terminal 1, a building constructed in 2009. It is located on the west side of the airport, while Terminal 2 lies to the north of its three runways.

Terminal 1 is subdivided into five sections. Module A is responsible for the air bridge to Madrid, and Module B for flights within the European Union’s Schengen zone. Module C handles flights by Air Nostrum, Module D other European flights and Module E other international flights. The terminal contains four lounges.

Terminal 2 consists of three linked structures, terminals 2A, 2B, and 2C. As the oldest part of the airport, it is mostly used by low-cost carriers. Like Terminal 1, Terminal 2 is also further divided into modules. Module U is reserved for Schengen flights, and Modules W and Y for other destinations around the world.

A free shuttle connects the two terminals should you need to travel between them. Within both terminals, you’ll find a selection of restaurants and bars, as well as shops and duty-free stores. There are a number of bank ATMs and currency exchange counters, a children’s play area, and free Wi-Fi.

How to Get to and From Barcelona Airport by Car

Although signposted, getting to the airport by car is perhaps not the easiest of journeys for those new to the city. The C-32B links the airport to the main interchange allowing access to various motorways and the Ronda de Dalt ring road.

The airport has approximately 24,000 parking spaces for cars, divided between short stay and long stay zones.

How to Get to and From Barcelona Airport by Bus

Several buses make the journey to and from the airport throughout the day. Tickets can be bought before boarding. They can be purchased from a kiosk in the terminal buildings as well as newsagents and stands throughout the city. Single tickets can also be bought on board from the driver.

Aerobus A1 terminates at Placa Catalunya, one of the city’s best-known landmarks. Departing every 15 minutes, buses operate between around 5 am and 10.30 pm each day. The journey takes 1.5 hours, stopping at Playa Espana and Gran Via – Urgell metro station along the way. Tickets start at €6 ($7) for adult passengers.

At night, visitors can instead make use of the N17 between Placa Catalunya and the airport’s Terminal 1 building. The N18 also stops at Terminal 2 when making the return journey back towards the city. Tickets cost around €2.50, with journey times of approximately one hour. These buses are standard city buses and do not have overhead or other compartments for luggage.

How to Get to and From Barcelona Airport by Rail?

There are metro stations at both Terminal 1 and Terminal 2. The Aeroport T1 station is located on the ground floor of Terminal 1, while Aeroport T2 is outside the Terminal 2 building.

Both stations are served by Line 9 Sud (South, or ‘S’) of the Barcelona Metro. It is colored orange on metro maps. To reach the center of Barcelona, you will need to change lines at either Europa Fira, Torrassa, or Collblanc stations. The city’s metro system operates from 5 am until midnight every day except December 24.

The R2 North Line of the local train services also connects the airport and city. They arrive and depart from Aeroport Cercanias train station in Terminal 2. Stops include Barcelona-Sants, Barcelona’s main railway station, from where high-speed trains leaving all over Spain.

How to Get to and From Barcelona Airport by Taxi

You will find taxis waiting outside of both terminals. Taxis use meters to determine the fee, which is based on the number of kilometers traveled. They are a great option if time is short and you are eager to take advantage of the many tours in and around Barcelona that are available. For instance, who can resist the full-day experience of our Dali, Costa Brava and wine tasting tour? Alternatively, how about opting for our Montserrat tour with food and wine, or our Barcelona private walking tour?

This Barcelona Airport Guide intends to give you all the options for getting to or from the airport as quickly as possible. That’s because we know that for the vast majority of travelers airports are a means to an end and nothing more. Our Barcelona design guide has some great ideas on what to see, eat, buy, and where to stay in the city. 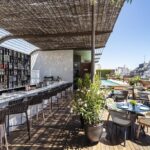 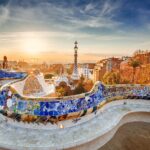