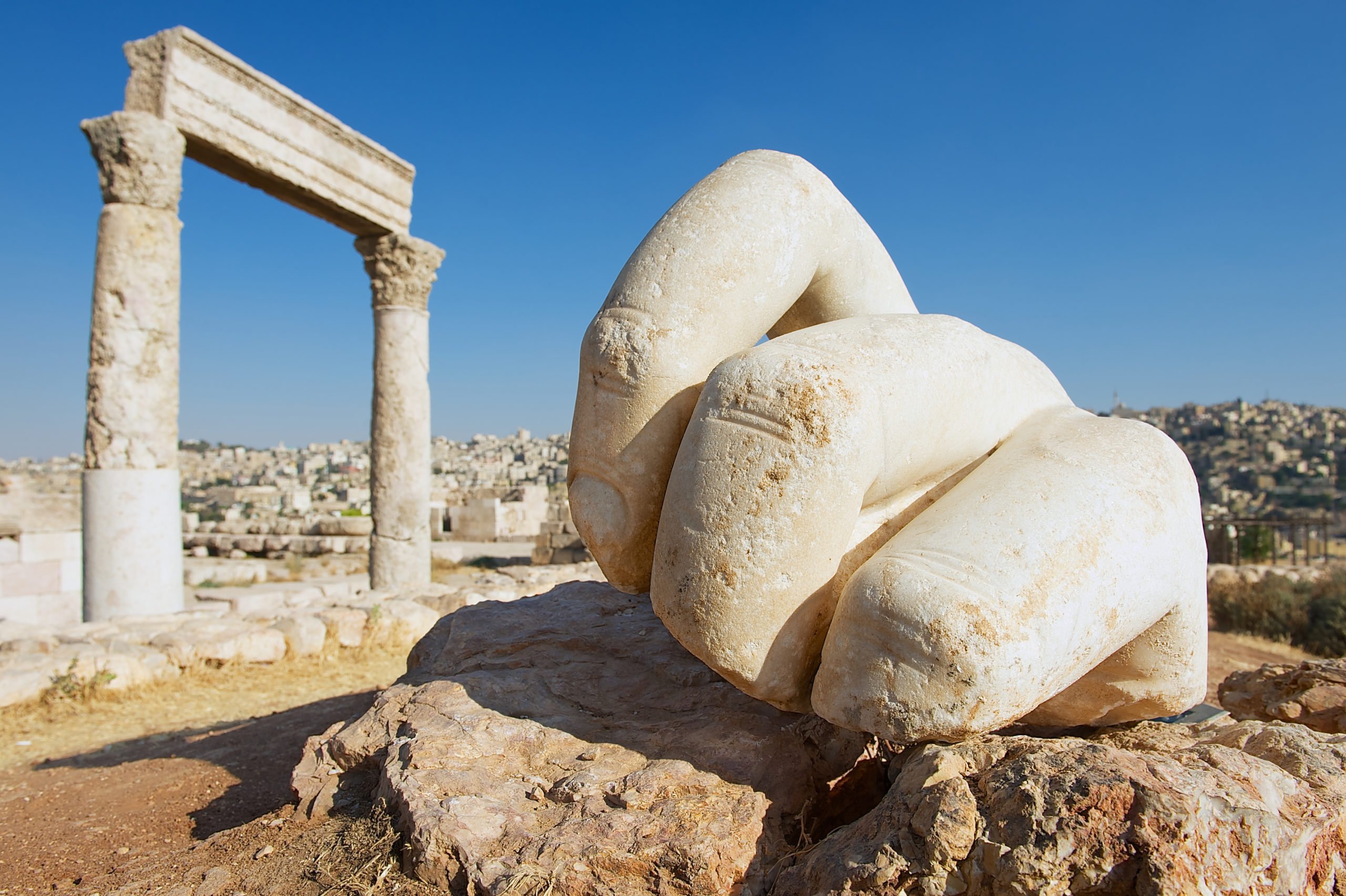 Amman is a vibrant city located in northern Jordan, a thriving metropolis peppered with UNESCO World Heritage Sites, design hotels, colorful souks, and vibrant restaurants. The city is surrounded by several hills, one of which houses some of the most fascinating archaeological sites in the country. With narrow winding streets below, modern bustling neighborhoods, and plenty of museums, shops (click here for our Amman Shopping Guide), and galleries to explore, you’ll never be stuck for things to do in Amman, and our Amman design guide is here to help you get started.

Amman’s impressive Roman Theater was built during the 2nd century when the city was known as Philadelphia. It sits on the main hill of the city close to Amman Citadel and Umayyad Palace. The theater was constructed on three levels, the highest tiers reserved for the gods, the middle levels for VIP’s, and then ordinary people on the lowest level. It was built on the hillside, angled to keep searing heat off spectators. It is a superb reminder of Roman life in the city and a must visit landmark if you want to learn more about Roman architecture and design.

Design aficionados will adore a visit to Duke’s Diwan. This is one of the oldest stone buildings in Amman and a living time capsule. It was constructed by Abdul Rahman Madi in 1924, serving as the city’s Central Post office, and then the Haifa Hotel. This local landmark is a place for historians, inventors, poets, and artists to meet, and is open for visitors from all over the world to share ideas. It’s decorated in traditional Jordanian style of the era with historical paintings, photographs, and antique furnishings. No Amman Design Guide or trip to this great city without a quick stop at this cultural icon!

Open daily from 8 am until 6 pm

Although not a historic monument of the city, King Abdullah I Mosque still typifies traditional Jordanian and Arabic design. The mosque was built between 1982 and 1989 and combines a beautiful egg blue mosaic dome with twin minarets. The interior holds up to 3,000 worshipers and is decorated with stained glass windows and suspended chandelier style lighting featuring 168 lanterns, individually etched with religious scripts. Surrounding, you’ll find wooden and marble panels and close to the entrance there’s a small, but interesting, museum to explore. The mosque is open to respectful visitors who dress accordingly and is worth a visit.

Often frequented by the Jordanian royal family, this historic villa houses one of the best restaurants in Amman, and maybe the country.  This elegant restaurant is decorated in traditional Jordanian design: elegant with a hint of old-world chic, and was a must to include in our Amman Design Guide for the decor alone. There’s a pretty courtyard surrounded by palm trees, plant pots brimming with colorful geraniums, and a charming fountain lit by lanterns. The restaurant serves regional cuisine including mansaf – a popular lamb dish with yogurt dressing. It’s the perfect place for a romantic meal in the heart of the city.

If you’re seeking traditional Levantine cuisine in the city, Fakhr-el-din Restaurant ticks all the boxes, and is also featured in our Best Restaurants in Amman. This award-winning restaurant in Amman was once the historic home of the Jordanian Prime Minister and offers an elegant space in which to feast on Middle Eastern cuisine. Chefs use the best quality ingredients to prepare mouth-watering grill dishes including chicken, meat, and seafood, coupled with delicious sides and scrumptious Arabic desserts. There’s a focus on locally sourced produce and fresh herbs are grown in their own organic garden in front of the house. The terrace is a delightful area for group and family gatherings, or you can dine inside the sophisticated restaurant decorated with marble flooring, fireplaces, and arched doorways.

Located in Amman’s new downtown, Al Abdali, Rotana Hotel is easily recognizable as the tallest hotel in the city. It’s the first tower hotel in Jordan, spread across 50 floors and soaring 188 meters above ground level. All rooms are stylishly decorated, using a mix of Jordanian design and contemporary signature furnishings to impress guests. Dining areas are sleek and modern with open kitchens, serving stations, and floor-to-ceiling windows, punctuated with intricate Arabic carvings and warm-hued tiles. Lobby areas are sprinkled with plants and greenery, there’s a swimming pool, and outdoors, a chic deck lounge where you can overlook Amman’s skyline. You’re also close to many of the Best Bars in Amman!

Le Royal Hotel in the heart of Amman showcases a stunning dual tiered exterior that wouldn’t look out of place in the desert. Hotel restaurants ooze sophistication with wooden panel designs, glass lanterns, and hand-crafted chairs. Guest rooms and suites feature sophisticated Jordanian interiors with large private balconies where you can overlook the city at night. In addition, there’s a Royal Club Lounge, VIP treatments, and fitness and spa facilities to indulge in during your stay. Also, if you’re staying in Le Royal, you’ll never get lost in the city. After dark, the elegant design hotel exterior illuminates in a kaleidoscope of colors that can be seen across all of Amman.